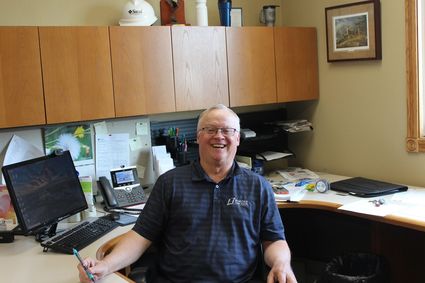 Bobby Lundbohm decided to retire after 44 years in the banking business. He began his career in 1976 at Northern State Bank in Thief River Falls, where he was an officer in training.

June 27 will be his last day as the president at Border State Bank and he will be officially retired.

Bobby and his wife Janet are looking forward to both of them being retired. Janet worked as the Roseau City Clerk until her retirement a few years ago.

They have four children; Charissa (David) McDonald, Andrew (Sara) Lundbohm, Sarah (Loren) Dryburgh and Robby (Emily) Lundbohm. Their four children have blessed them with 11 grandchildren which will keep them very busy.

Bobby reminisced about all the changes in the banking industry. When he began he started with paper ledgers and now everything is computerized.

He said, "Customer relations aren't what they used to be with all the electronics nowadays."

"Checks are disappearing," he said. He feels it won't be long until we don't even use checks anymore.

His co-workers are going to miss Bobby. Amanda Zimmerman said, "He's an absolute hoot!" She will miss his humor the most and how he makes every day interesting. She also enjoys his upbeat attitude.

Jason Smith finds it unbelievable how many customers come in and remind Bobby how he gave them their first loan when he was working at Citizens State Bank. Jason said, "He makes work enjoyable and entertaining. It would be a stuffy job without him."

"No matter how busy Bobby was he always made customers feel like they were his only customer for the day," remarked Jason

Bobby will be missed by fellow co-workers and customers but he and Janet will still be familiar faces around the community.

"We will be staying in Roseau, it's our home," said Bobby. He looks forward to hunting, fishing, golfing and traveling, but most of all spending time following the grandkids' events.

He said, "I will miss working with long-time customers to help them solve problems and my co-workers who made my job easy. They are all very good at what they do!"

Bobby felt Border State Bank was a great fit for him and that it was a great honor and privilege to work in his hometown. He is proud to be a part of the Roseau community. "It's a great place to raise a family and people arehardworking and very thoughtful," he said.