Born to ride wins the prize 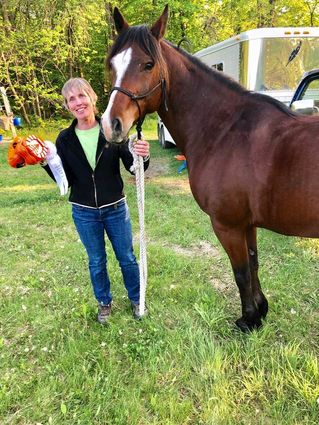 At the Maplewood West Endurance Ride at Maplewood State Park in Pelican Rapids on Saturday, June 1, Malung's Jackie Erickson, 55, a bit of an Annie Oakley on horseback, had her finest day.

"I was so excited," she said earlier this week. "I never dreamed that I would win, not the actual ride, but we got the Best Condition Horse Award. We actually placed fifth in the 25-mile race."

We is Jackie and Abu.

"Abu was named after something in a kids' movie years ago. He's 15 now," she said about her half Arabian gelding.

How many hands is it?

"The award is based on how good the horse did. Some people value the Best Condition Horse more than winning the race. I wasn't the fastest. The fastest person did 25 miles in 2 hours and 58 minutes, and I did it in 3 hours and 15 minutes. I was 17 minutes behind, which are penalty points. Plus I was light weight, and the race winner got penalty points for that," she said.She was bubbling over with enthusiasm.

"But Obu's veterinarian scores were so good that he won the Best Condition anyway."

Jackie is not the Willie Shoemaker of horse racing, but she is a gal who loves to compete.

"It was just so exciting. I was so darned tired I was like a dish rag, but I had a grin plastered on my face all night, I think."

Jackie and Abu have teamed up at the Maplewood West Endurance Ride in past years.

"I had raced in the 50-mile race but not with my present back problems," she said, explaining that there were 28 horses in the 25-mile race with numerous hills.

Each rider's weight is considered, much like handicaps are in golf.

"I'm not that heavy. What they do is they weigh you with all the tack that the horse carries. Abu was carrying 158 pounds with the saddle and all the gear," she said, noting that the horse that won the race carried 219 pounds.

However, Abu scored big on the three veterinarian scorecards.

"His veterinarian scores were so good that it made up for the penalty points because of my lighter weight," she said.

"They check to make sure the horse doesn't have any sores, they haven't been cut on the ride, there's no limping, and they don't go anywhere if their pulse doesn't come down. If it doesn't come down to 60, you're done for," said Jackie, noting that each horse was tested before the race started, at the halfway mark, and at the end.

"Not this year, but he usually does because the race always falls on our anniversary on June 1," she said. "We've been married 34 years."

Did you train for this race?

"Gosh, I made so many trips to the forest. I went every weekend, and I had about a 20-mile loop," she said. "We don't gallop much. It's a lot of trotting, and you cover more ground without wearing them out."

"It is just fun to be out in nature. You see more on a horse that you would ever see driving a vehicle."