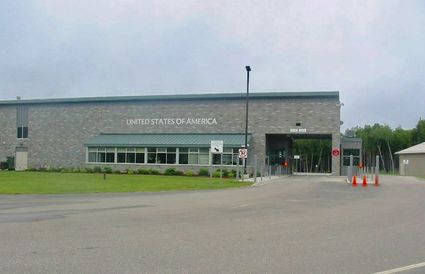 Let's cut to the chase. You can go to Washington D.C., fervently plead your case on why the Roseau and Lancaster ports of entry deserve to have their hours returned to their previous schedule, and yet Customs and Border Patrol stood firm that those two ports don't require longer hours of operations.

On May 17, CBP forwarded their response to the mid-April meeting in Rep. Bennie Thompson's office, which included numerous public officials strongly backing the return to the previous schedule.

The two-page letter, with percentages and statistics that would impress a certified public accountant, provided the knockout punch in the second to last paragraph on the second page.

CONCLUSION: Traffic variations at Roseau, Lancaster, and Minnesota since FY 2017 show that reduced hours have not negatively impacted cross border traffic at the two ports. The Seattle Field Office has received no complaints - written, electronic, or telephonic - since reduced hours went into effect. At the March 2019 meeting, Roseau County and City of Roseau officials as well as other stakeholders did not voice to CBP representatives any disruptions affecting appreciative segments of the community although they did note several examples of inconveniences to individuals and small groups such as a bowling league.

Immediately upon receiving that letter, Mayor Jeff Pelowski looked skyward and thought, "Where is the justice?"

He attended that meeting in D.C, the discussion included the pertinent fact that LifeCare Medical Center in Roseau is an international hospital with Manitoba residents frequently requiring urgent medical care.

"Unbelievable. It isn't over yet," said Pelowski, adding that the City of Roseau hasn't heard from Congressman Bennie Thompson's office in Washington, D.C.

"We don't consider it over yet. Rep. Thompson asked for a lot of information from them for his committee. How can they (CBP) say nobody has complained? We went to Washington, D.C. for Christ's sake! What more do they want for complaints? That nobody has filed electronic complaints to their system? Give me a break," he said in exasperation.

Mayor Pelowski than added, "They wouldn't look at it anyway! It doesn't seem to matter what we say."

There was no quit in his voice as he explained that the City of Roseau is not going to go away on this issue of returning the border crossing hours from 8 a.m. to midnight at the Roseau Port of Entry.

"I think the most disappointing thing is that there doesn't seem to be any accountability. There's no process for the decisions they make. They simply make them and there's no recourse," he said.

Still, Pelowski refuses to toss in the towel.

"We're still pursuing it," he said.