A TALE OF TWO FATHERS 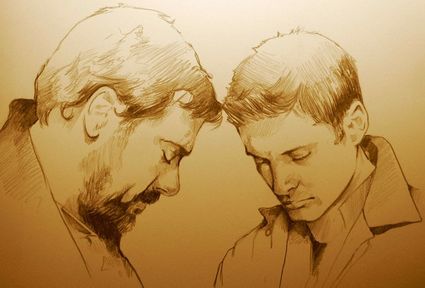 Yes, Fathers Day is soon upon us, and maybe some of you may even be receiving this article after the fact, but there's more than Father's Day attached to the "tale" I'm going to examine.

I want to zero in on the book of Luke in the New Testament, chapter 15: 11-32. Now this story which Jesus told is commonly referred to as the "Parable of the Prodigal Son" (we'll see why). The subheading in my New Living Translation refers to it as, "Story of the Lost Son." Others have suggested, "The Story of Two Sons." I want to bring it to you as, the Story of Two Fathers. You may not discover why until the end of the article.

To orient you to what Jesus is up to lets pick up on the word, "prodigal," which refers to the younger of two sons: "A man had two sons" (Luke 15:11, NLT). The story centers on the younger son but we must see him in relationship to his father. There are lessons for fathers in this story. Are you with me, dads?

The first thing I notice about this father is that he was approachable; his door and his heart were always open to his sons. That's important to dadness. Verse 12 says: "the younger son told his father, I want my share of your estate now, instead of waiting until you die." That was the Jewish perspective on inheritance. The oldest son would receive the greatest inheritance, about two thirds, and the rest would be divided among the younger sons. And this would take place after the father's death. In this story the younger son didn't want to wait. A side note here is that the Bible, God's word, teaches that children are to respect their parents, in this case the father. This implies that a father is to live a respectable life before his children, and of course, his wife. The apostle Paul wrote in Colossians 3: 20, 21: "You children must always obey your parents, for this is what pleases the Lord. Fathers, don't aggravate your children. If you do, they will become discouraged and quit trying" (NLT). A father should be approachable so that his children can come to him with the assurance that they will be received with a listening (not just hearing) heart. This scripture nudges us dads to ask ourselves: "Are we approachable?"

The second thing I notice about this father is that he was faithful to his faith. Luke 15: 12b says, "So his father agreed to divide his wealth between his sons." The rules for inheritance came from God (see Deuteronomy 21:15-17) and this father wanted to obey God's Word. This was not the most crucial part of the Law, being far overshadowed by the Ten Commandments, but here was a father who wanted to live faithful to God's Word, the whole Word of God.

One of the greatest things a father can leave as a legacy to his children is a faithfulness to the Word of God. A godly father will live his life out of the Scriptures and his children will be blessed. Proverbs 14:26 says in the Living Bible: "Reverence for God gives a man deep strength; his children have a place of refuge and security."

The third thing I notice here is that the father allowed his son to enroll in the school of life. Verse 13: "A few days later this younger son packed all his belongings and took a trip to a distant land (today it might be college), and there he wasted all his money on wild living." As I write this I am reminded of two Scriptures in the Old Testament. First Psalm 62: 10b. David writes: "And if your wealth increases don't make it the center of our life." Then the wisdom of Solomon in Proverbs 23:4,5: "Don't weary yourself trying to get rich. Why waste your time? For riches can disappear as though they had the wings of a bird. In the school of life the younger son experienced all of the first verse, and the last part of the second verse.

Now the younger son's story is not every child's story after leaving home but it is the story of some and the heartache of their parents. It is possible that in the father's wisdom, he knew that his son would not hang around home for long after he had the resources to "do his own thing." But it was time to allow his son to enroll in the school of life. For some young people the school of life is the best "higher education" they will ever receive, but the tuition is high and they are the only ones who can pay it. And notice the father never offered his son an UNLIMITED BAIL OUT CLAUSE when he left home. Bailing out our kids is not always the best way to love them.

The fourth glimpse we get into this godly father's life comes through his son after the son's world caved in. It is found in verses 14-19 with a particular emphasis on verses 17-18: "When he finally came to his senses, he said to himself, 'At home even the hired men have food enough to spare, and here I am, dying of hunger! I will go home to my father and say, "Father, I have sinned against both heaven and you, and am no longer worthy of being called your son. Please take me on as a hired man.'"

"When he finally came to his senses..." What senses? The senses his father had given him. John Weborg, professor emeritus from North Park Seminary in Chicago has said, "We give our children the language of life; we teach them how to describe their world," and I might add, describe themselves. This father had given his sons a language for life, God's language. He gave them something to come back to if they wandered away. Proverbs 22:6 says, "Teach your children to choose the right path, and when they are older, they will remain upon it" (NLT). Now this isn't a promise without exceptions, but it has a great track record. It worked for this father.

The son said, "I will go home to my father and say "Father I have sinned against heaven and you..." He has come to the realization that sin always has a duel affect: first against God and secondly against others.

So the son heads home. Now note his father's response: "...while he was still a long distance away, his father saw him coming. Filled with love and compassion, he ran to his son, embraced him, and kissed him" (verse 20). The father saw his son "while he was still a long distance away." What does this tell us about the father? He longed for his son with an aching heart that never gave up hope. When he sees his son on the horizon, he runs to meet him; perhaps with tears streaming down his cheeks. How many times he had stood on that old front porch looking down the road; that road that lead to the far country. Hoping praying, and rehearsing this very scene in his mind; this scene which had now become reality. His son was back home. It truly was the Father's Day. "We had to celebrate this happy day," he said to his older son who wanted judgment not grace. "For your brother has come back to life! He was lost, but now he is found" (verse 32). The end! Not quite.

Don't forget the title of this article, "A Tale of Two Fathers." There's another Father in this story: God! Why did Jesus tell the story of the "prodigal son," and the other two stories? Who was his intended audience? To truly understand the "tale" or story we have just examined, to really get the most out of it, we must go back to Luke 15: 1-3. Luke writes: "Tax collectors and other notorious sinners often came to listen to Jesus teach. This made the Pharisees and teachers of religious law complain that he was associating with such despicable people – even eating with them" (no room in their "church" for people they had labeled, "sinners". Does this happen today?

Jesus' intended audience was these religious leaders. He is saying, "You don't understand (maybe even know my Father). Let me tell you what my Father (God) is like: "A man had two sons..." God is the other Father in the story. He will allow us to exercise our will against his loving heart. But! But! He longs with a loving father's heart for us to come back. While we are "still a long distance away," he sees us. Longs for us "filled with love and compassion," and, "runs," bridging the gap between us through his Son, our Savior. Do you need to come home to the Father? Have you come to your senses? Can you see the tears in his eyes for you?

By the way, the older son in the story represents the religious leaders; those with a critical spirit toward those Jesus wants to spend time with; to hang out at their "haunts."