WRITE ON! A Rainy Day in Paris 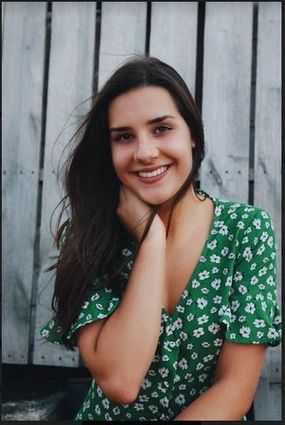 It was the summer of 2017. My Californian cousin, Kylie, and I were deciding on what to wear for another beautiful, sunny day in Paris, or what we thought was going to be. But just to be safe, we packed an umbrella in our backpacks. Boy are we glad that we did. After deciding on a pair of black jeans and white crochet tank top, we left our little villa and headed to the City of Love. Not knowing what our day would hold, we decided to stop and get a late breakfast at one of the numerous quaint cafes in Paris. I decided on the basic Parisian breakfast, a croissant and cappuccino. While sipping on my cappuccino, Phil and Gretchen, my great-aunt and uncle, suggested we go see the Sacre-Coeur Basilica. Knowing they are well experienced travelers and have been to Paris a couple of times, I trusted their opinion and we decided to go there.

I'm really glad we chose to see this beautiful place, because once we finally got to our destination, it was absolutely breathtaking. The basilica sits high and mighty on top of a hill, overlooking all of Paris. It is a little bit of a workout to get even halfway to the church, but I am thankful for the level ground and benches for a resting area. Kylie and I decided to use this opportunity to take some pictures of the amazing view of the city, while the old-timers caught their breath. Being the typical sixteen year old girls we are, Kylie and I snap some selfies with each other. While we were taking pictures, we noticed that gray clouds started to take over the baby blue sky. The clouds started to dominate the sky, and a line of rain approached us rapidly.

Kylie and I glanced at each other with wide eyes. It was still a long ways up to shield us from the rain. I looked around for Phil and Gretchen, and they too seemed to notice the sudden change in weather as they reached for their umbrellas. I attempted to get my umbrella out of my backpack, but it was too late. All of a sudden it started downpouring, hard. I struggled to free my umbrella, but it would not budge. Within seconds I was drenched from head to toe. I take in the sight of the chaotic scene before me. People are running all over the place trying to find shelter. I frantically tried to find Kylie, but she must have gotten carried off with the crowd towards the basilica. I felt a tap on my shoulder turned to see a woman in her mid 40s. She gestured for me to come with her under her polka dot umbrella. I quickly nodded and gave her an appreciative smile. We then scrambled to make our way up the never-ending stairs.

The wind really started to pick up as we climbed higher and higher. People were running into each other all over the place, trying to protect their faces from the deadly combination of wind and rain. As we run up the stairs, I noticed a woman lose her footing on the slippery surface and slide down the bumpy stairs. It was quite the sight and I could not help but chuckle to myself.

Finally, we reached the top of the fancy church and stood under large pillars. I thanked the lady again and went inside to find my relatives. The place was packed with soaking wet people, all breathing hard from the trek they had just endured. I was filled with relief to find Kylie, along with Phil and Gretchen. I could not help but burst out laughing when I saw their appearance. Kylie's mascara ran wild under her eyes, and Phil was doubled over looking like he was going to pass out. I am sure I looked just as crazy. They joined me in my laughter after we recalled the events that happened in the last five minutes. Kylie exclaimed that she collided head on with a man and they both fell down with a grunt. Kylie and I both could hardly believe everything that had just happened. We were unable to contain our laughter. Our sounds of laughter echoed throughout the large church, and we got a few "Shhhhh's" that made us stop, for the most part.

After the excitement died down, we checked to see if it had stopped raining. Sure enough, the clouds cleared and the sun was shining bright. The rest of the day we spent walking around outside in the Left Bank, the artistic side of Paris. I ended up getting a portrait drawn of myself. The artist made me look way better than I appeared. At the end of the day we grabbed some ice cream and took the train back to the charming villa in the outskirts of the magical city.

Even though nothing spectacular happened to me, this will always be my favorite day of the trip. These are the type of experiences that I will always remember and laugh about for years to come.