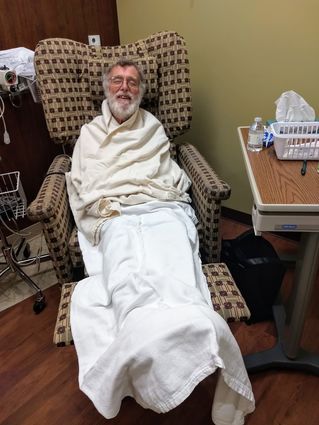 Recently I was standing at the "express lane" counter at SuperOne to have a few of the sustenance's of life checked through by my friend, Taylor Warne, who always treats us customers as if each of us was the reason he came to work that day. Thanks, Taylor!

Eyeing my groceries, he asked, "Did you get everything," "I hope so," is my usual response (of course, I always forget something). "Let's see, he said, "chicken, eggs...I wonder which came first," he muses, "the chicken or the egg?" Have you ever wondered about that? In response to his question, he offered: "Maybe the egg," the customer behind was taking this all in: "Well," I responded, "from a biblical perspective, the chicken came first. Chickens are a part of God's creation" and although I didn't say this, He equipped them to lay eggs; and, of course, to have more chickens (see Genesis 1: 20 -25). He looked at me and responded, "No one has ever been able to give me an answer to that question before." "Have a Super One, he said, as I picked up my groceries to leave. SuperOne has great employees and a super manager to help make it all happen. Thanks, Gary!

Which came first? This question has more than one application. In applying this question to life we must change the first word from, which, to "Who," who came first, and that takes us back to the beginning of the Bible, God's Holy word; "In the beginning GOD Created the heavens and the earth" (Genesis 1:1).

I thought about this recently when one of the latest Democratic Party candidates for President jumped into the "ring" accusing pro-life supporters of being "sexist!" Hmmm, but then she went on to criticize "Conservatives" of using their "faith" to argue their position. Well, Yes, I hope so! I want to challenge her criticism of faith on the issues of life with the, "Which came first?" question. Which came first, personal faith, or God? That's a no-brainier. No God, no pro-life faith. Now to be fair, I must point out that there are atheists who are pro-life. What is it woven into their hearts that stirs them to a pro-life perspective? If this presidential candidate wants to raise the faith issue, I challenge her to go to the Source of this faith that disturbs her, God! She needs to take up her argument with Him. The buck doesn't stop with, or even begin with the "believer." As "born-again" (Jesus' terminology) people of faith, whether "conservative" or otherwise, we need to bring our faith relationship with God into every arena of life. We should not divide our world into the "secular" and the "sacred." All of life should be lived unto him. I would also challenge this candidate to reflect on the apostle Paul's question concerning God in Romans 11:14; "Who knows enough to be his counselor?"

Let's ask the, "Which came first?" question in relationship to the Bible. Again we must begin with God; no God, no Bible. The book we refer to as, "the Bible" began in, and came from the heart of God. God's Word existed long before the bible came into being. God's Word is eternal. In Psalm 119:89 we read from the Psalmist's pen: "For ever (how long?), O Lord, your word stands firm in heaven" (NLT). The apostle Paul reminded Timothy in 1 Timothy 3: 16-17; "All Scripture is inspired (God breathed, NIV) by God and is useful to teach us what is true and to make us realize what is wrong with our lives. It straightens us out and teaches us to do what is right. It is God's way of preparing us in every way, fully equipped for every good thing God wants us to do" (NLT).

Now in saying this about the Bible I want to keep in mind, the Bible can be, and has been misinterpreted, and these misinterpretations have been put forth as "truth." There are huge expressions of this in the world of religion. We need to do careful bible study, and not in isolation but as a part of a bible-believing, historical (New Testament) expression of the Christian Church, or for Jewish people, an orthodox community of their "Old Testament faith". Pro-life begins in the Old Testament! We dare not "forge" God's signature to our own opinions.

I want to ask the Which came (or comes) first question; in relationship to marriage and family. Which came first, living together (or even just, "sleeping around," or "grazing") and then maybe getting "married," or being united together in marriage first? In Genesis 2:18 when God said, "It is not good for the man (Adam) to be alone. I will make a companion who will help him." He didn't just make Eve (actually he included Adam in the process), plunk her down in the Garden someplace and let, "nature take its course." Genesis 2:22 says, "Then the Lord God made a woman from the (Adam's) rib and brought her to Adam." God was present and officiated at the first "wedding"! Now you may think I'm making too much out of this. Maybe. But for those of you who have followed the, "Which comes first?" route into marriage, do you regret it? Out of God's Word it is my persuasion that marriage, or even looking ahead to marriage, should begin with God. It was his idea in the first place. Don't just rely on the clergy person to invite him to the wedding!

I used to say to couples who had been "living together," and now want to, "get married". "I commend you for wanting to bring the relationship you've already started, into the bonds of marriage. I would be honored to help you do that."

What about our sexual relationships? Which should come first? The author of Genesis offers this commentary on Adam and Eve's relationship: "This explains why a man leaves his father and mother and is joined to his wife, and the two are united unto one" (Genesis 2:24). The King James translation puts the last phrase:"...and they be one flesh." Now this has a deeper meaning then sex, but the "one flesh" phrase is a reference to their first sexual intimacy experience (after becoming man and wife)! After they were married, Genesis 4:1 tells us, "Then Adam slept with his wife, Eve, and she became pregnant." Here's God's, "Which comes first?" order ,for marriage and family: First God, then marriage, followed by sex and children. I wonder how paying attention to God's order would affect the abortion issue today?

Update: From Londa Olson (Joe and Julie's daughter) Today Wednesday, my dad is getting his second round of chemo here in Roseau instead of in Grand Forks, N.D. But before that, he received the immune therapy. That is for his Melanoma cancer in his neck that has been shrinking! The chemotherapy, which is for the other cancer down by the abdomen, hopefully will also make an impact. First, they're flushing out the lines to make sure it's clean before starting the treatment. He's getting pretty spoiled. As you can see, they put a heated blanket around him. And I'll be massaging his feet. He's pretty relaxed. Continue to keep him in your prayers as he continues this journey!!