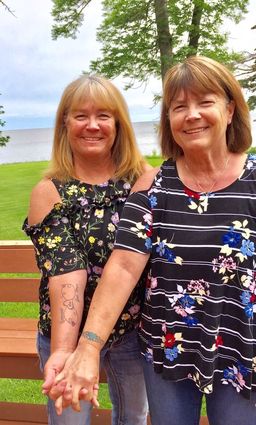 Twins Jean and Joan (Inset) The twins shoulder to shoulder

Forever, tattoos were the persona of sailors, soldiers and criminals - a rogues' art gallery of sailing ships, naked ladies, eagles, skulls, serpents, stilettos, and "Born to Raise Hell" inked across their upper torsos and other body parts.

Now, tattoos are the norm.

Richard Anderson, a Roseau barber, is a walking Picasso.

"I have five tattoos total, and I don't want to know what they cost," he said and laughed.

His most recent tattoo is the American flag that he got on February 25 out in Las Vegas.

"It took about three hours," he said.

If he flexes his bicep, the flag almost...