Steve Bouton reels in a catch of a lifetime 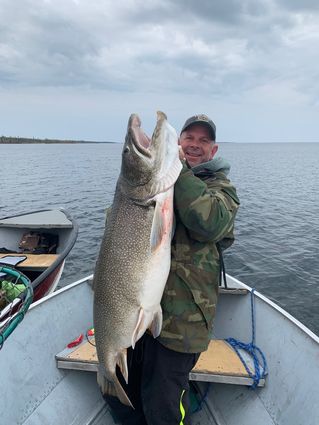 Steve and his monster Lake Trout

Steve Bouton had been at a Boat, Sport and RV Show in Duluth when he found out about a fishing trip to Saskatchewan, Canada. He usually goes on a trip once a year with his brother, Mike and a lifelong friend, Gary Haus. They have gone on a number of hunting trips together, but this time the fishing trip peaked his interest.

In June they set off for Northern Saskatchewan, Steve had no idea this trip would be one that would be unforgettable.

They had never been to Reindeer Lake before, it was their first time there. "We like to try new locations," said Steve.

The lake is a great place to catch Northern Pike and Lake Trout. "I purchased a new rod and reel at Streiff's for the trip," mentioned Steve. It was nothing out of the ordinary, just a normal rod and reel combo to catch some fish.

He was surprised when they headed out in the guides 18' boat and there was still some ice to break up even though it was June.

The guide found a "hotspot" for them to fish but no one knew how "hot" this spot was going to prove to be.

Steve said, "at first I thought I had a snag until I felt a couple tugs!" The water was clear and they were fishing in about 18' of water. He started reeling and felt nothing again. "It didn't move," he said. Then it moved a little and he began reeling . He let line out as it would take line, it became a game of tug of war. He finally was able to get a glimpse of the monster as he was going back and forth around the bow of the boat following the fish.

The adrenaline started as this was not a fish he wanted to lose. "I was worried the line would snap or the hook would slip out," Steve stated. The fight continued for about 45 minutes until Steve was able to get the enormous Lake Trout into the boat.

This wasn't an easy task either since there weren't any plans of catching such a large fish. The rod and reel, line and net were all for normal sized fish, but against all odds he was able to land it and they got it netted and in the boat.

Next problem was they didn't have a scale large enough to weigh it. "I held it in my lap as we raced over to the boat Gary was in to get it weighed," said Steve.

"It's the biggest Lake Trout I've seen and the guy who owns the camp says it's the biggest he has seen or heard of." said Ron Murphy. Ron is a guy they met at the Duluth show.

Ron also mentioned, "The guy that is similar to DNR had told me he thought it was a world record for a rod and reel catch." Whether it is a world record or record of any kind, Steve has the photos and stories to tell about his experience of catching his largest fish to date.

Steve released the fish after the photos and measurements were taken. "I want someone else to get the once in a lifetime experience I did! It was a blast and the odds of it happening again are next to none," he said.

He is having a mount replica made by Artistic Anglers so his once in a lifetime fish will always be a vivid memory.