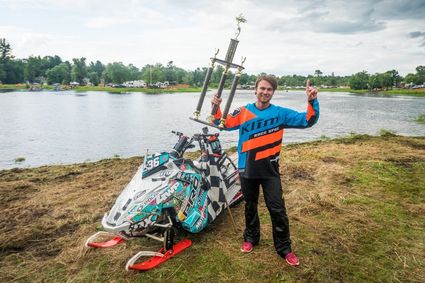 Polaris Athlete David Fischer had a great strategy at the 2019 World Championship Watercross in Wisconsin; get out front and maintain a lead.

“Getting out front gave me smoother water without all the choppy waves” explained David Fischer. “There were six guys racing eight laps in the final when I won in 2017, I had to battle through those eight laps This year I managed to take the lead and kept racing on the water. It felt like riding in super deep powder although water is much more unpredictable with constantly changing conditions.”

“I grew up watching my dad race snowmobile watercross,” said David “My first snowmobile was a Polaris 120 I was only three when I started riding. Mom told me she couldn’t get me to take off my snowsuit or my boots. Riding snowmobile became my passion!” David’s dad Jeff Fischer himself a snowmobile watercross racer for 29 yearsi is his son’s biggest fan.

“I remember when a friend suggested I race snowmobile watercross,” recalled Jeff Fischer. “I thought why would I want to do that? If I crash snowracing I could get back on my sled. Screwing up

on the water means sinking to the bottom! But once I raced watercross I was hooked! Still there’s nothing quite like seeing my son David win his first world champisonship in 2017 and again this year!” David grew up in Eagan and began racing watercross when he was only 14 Now 26 and a Polaris Athlete for four years, David’s favorite way to train is riding sleds in the Rockies. He also enjoys trail riding in the midwest and jet skiing during summer months.

“It’s all about endurance fitness and control,” explains David “I ride as much as I can! I’ve broken a few bones through the years. My mom has a Rolodex full of the best doctors in the Twin Cities! There were times when I knew she didn’t want me to keep racing. Then I’d heal up and she knew how much I couldn’t wait to get back to it! ”