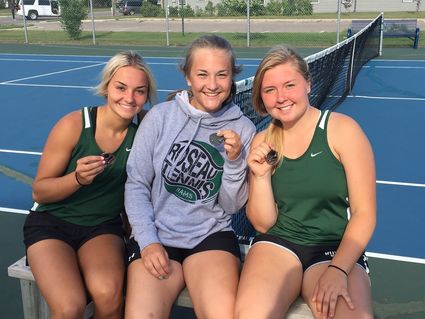 The Rams with their silver medals after the Park Rapids Invitational. (L-R): Anika Stoskopf, Kiersten Flaig, and Emma Zimmerman.

The Rams Girls' Varsity Tennis team hit the ground running in the first week of the season. After four days of practice to shake off some of the rust, Roseau spent the opening weekend of the season in Park Rapids.

At the North/South Challenge Quad on Friday, August 16th, Roseau played three very solid teams. In the opening match against a much-improved Aitkin squad, the Rams fell just short in a 4-3 loss. The match was just as close as the score indicated, as there were six tiebreakers during the seven matches. Roseau's wins came from Charlene Grahn at 2nd singles, Kiersten Flaig/Lind...