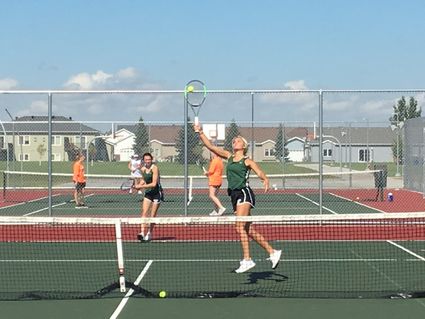 Anika Stoskopf leaps to get an overhead shot at the net while Savannah Byfuglien charges in from the baseline during their 3rd doubles match in Moorhead.

In a week with only one contest on the schedule, Roseau's varsity match in Moorhead on Thursday, Sept. 19th was especially significant. Not only did the Rams get to play against a very good Spuds team, they were able to do it in front of an Internet-TV audience as the game was live-streamed on spuds.tv. The match is also archived, so you can watch any time if you would like to see the tennis team in action.

With a senior-dominated lineup, Moorhead has one of its best teams in program history. It showed in this match, as they were able to control play in many matchups and dominate the Ra...