Back in the saddle again for St. Jude 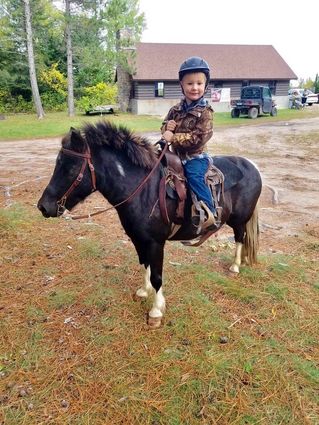 Last weekend at the Bemis Hill Campground in the Beltrami Island State Forest, Darlene Danielson wasn't walking like she was playing dodgeball and trying to side step occasional horse poop.

Step in it often?

"Probably, but it doesn't bother me none," she laughed, adding that she doesn't sleep with her boots on.

"The weather was great actually. There was a little rain on Friday, but Saturday was a good day," she said on Sunday afternoon during the clean up at Bemis Hill.

"The turnout was less than last year but we had about 40 riders and four wagons," she said, noting that Ernie Meier, Rod Cargo, Stan Weston and Scott Langton were the wagon masters.

There was one little cowboy on the 10-mile trail ride that she was impressed with.

"He's a cute, little bugger. It was his first time here. He's five-years-old, and he rode the entire way on a fat, little pony," she said.

Little Wyatt Thomas, who hails from Rush City, rode alongside his dad, Drew.

"We served a hundred people for supper on Saturday," she said. "Groovy Grub was really happy with that. They donate some of what they make back to us," said Darlene.

"Dixie raised $6,900 and was followed by Garry Langton of Salol with $1,365, and Dave Danielson of Roseau with $1,075," she said, adding that there were no prizes for being the top three fundraisers.

"We do this for the kids," she said, tipping her cowboy hat to a local couple.

"Arnold and Nora Kaml of Pencer donated the firewood for the lodge and outside campfires. It was a big load of popple and tamarack slabs."

How much did you raise?

They had a few new people, but it was mostly the same crew that come every year to help support the St. Jude Trail Ride.

Darlene and Mary Cole are the co-coordinators of the St. Jude Children's Research Hospital Trail Ride.

"This was our 20th year, and we get a lot of support from our families," she said. "The date next year is September 26."

And she's hoping the game little guy on the fat little pony rides the trails again for her favorite charity.