Gotziaman is inducted into the Manitoba H.O.F. 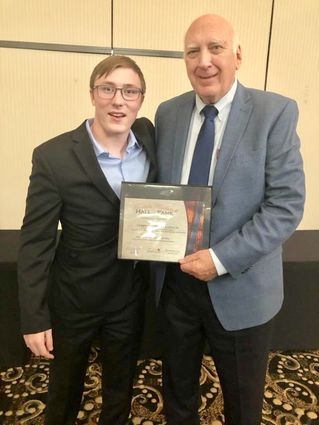 Terry Gotziaman with his grandson Matthew

Terry "Gotzy" Gotziaman, a former Roseau resident and a native of Thunder Bay, Ontario, Canada, and the former RHS athletic director and principal, was honored in Winnipeg this past weekend.

Gotzy, who taught in Sprague and coached the Ross L. Gray girls basketball team to six Manitoba provincial titles from 1972 through 1983, was inducted into the Manitoba Basketball Hall of Fame at the Winnipeg Convention Center on Saturday, September 28.

Six of his teams were also inducted during the Manitoba Basketball Hall of Fame ceremonies.

Mr. Gotziaman was asked to speak in behalf of his former players.

"I talked for five or six minutes," he said this past Sunday from his residence in Bemidji.

How were your former players?

"They still look good, they're trim, and they're unbelievable," he said and made sure the audience understood why the Lady Raiders had such great success.

"There were no superstars on any of these teams. They played as a team, they gave it their all, and they never fought with each other," he said, recalling that during the ceremonies in Winnipeg, the players from those teams came up on the stage and sang the Sprague Raiders fight song.

"When they got done singing, I said, 'You know what, girls? Don't quit your day jobs. You're a lot better basketball players than singers, I can tell you.' The whole audience busted up."

There were some other perks for the Manitoba Basketball Hall of Famer.

"I got more hugs than you can shake a stick at," said Gotziaman. "We had a wine and cheese party in the afternoon and that was really great."

During the induction ceremony, the emcee remarked to the audience, "The Sprague Raiders were the Manitoba Hoosiers of girls basketball - a small school that traveled all over the province playing big schools."

Also, in the official program, it was noted: The Ross L. Gray Raiders (Sprague) established a true dynasty in Manitoba High School Basketball.

That was one of the many highlights for little Ross L. Gray School in Sprague, Manitoba, Canada.

"One of the things I did at the end of my talk, I quoted one of the sayings of John Wooden, the UCLA Hall of Fame basketball coach," said Gotzy, who considers TEAM a crucial component in achieving success.

Up in Sprague, they are not likely to forget how little Ross L. Gray won a total of eight girls provincial championships, the final two coming in the middle 1980s after Coach Gotziaman had departed from Sprague, leaving it with a lasting legacy.