Reflections from the Roseau Athletic Hall of Fame Ceremony 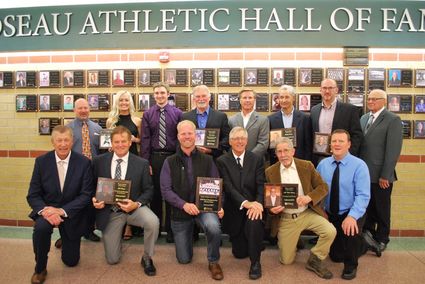 On Sunday afternoon many of Roseau's finest athletes, mostly middle-aged and/or senior citizens, marched into the Roseau School Theater for the induction ceremony.

They still look trim and are extremely grateful for having grown up in Roseau and thankful for their parents, education, coaches and fans.

Jack Swanson, the emcee, noted that presenter Aaron Rose, a former wrestler and coach, had wrestled a bear in his line of duty as a fireman.

Leading off was Kyle Ross, who introduced his dad, Gary Ross, RHS Class of 1971, a multi-sport athlete for the Rams.

Gary Ross, a star athlete who played on the 1976 U.S. Olympic hockey team and was a state championship girls golf coach, left nothing out in his acceptance speech, describing his era as the Golden Era of Sports.

"All of the sports were for kids. They kept us busy and normally out of trouble. Parents were interested, but it did not encompass their lives. We played for fun. We learned how to win and lose and to play again the next day."

In a revealing moment, Mr. Ross, a super competitor, described his success as an athlete.

"I never was the best player on any particular team, but I feel I worked as hard or harder than all the others."

"I remember him telling the team during our first meeting that there are three things to do at school. Classes, hockey, and party, and that we could only do two.

"Unfortunately, I thought I could do all three, so school was affected," said Mr. Ross, adding that he dropped out of UND after his sophomore year.

The rest is history because Gary transferred to Bemidji State, got his grades and priorities in order and played for Coach Bob Peters' BSU hockey team.

In 1975, Gary was invited for the tryouts with the U.S. Olympic hockey team under Coach Bob Johnson.

He made the team because of his hockey skills and his work ethic and played on the 1976 USA Olympic hockey team in Innsbruck, Austria.

"Jeff was always the leader in our sports activities," he said, highlighting his decency and his stellar character as a player, coach. and human being.Immediately, Jeff congratulated Gary Ross and Robbie Harris (fellow inductees) as "two of my high school and college heroes."

He continued thanking numerous former coaches, Terry "Gotzy" Gotziaman for hiring him, and then credited the late athletic director A.J. Kramer as his inspiration for getting kids involved in activities.

"I wanted to create life-long memories, and expose them to sports and experiences, and being a member of a team."

He successfully coached numerous teams - football and boys hockey to girls hockey and softball - before humbly saying, "I do not know if I am deserving of this honor."

He is very deserving.

"I coached because I like kids and sports and seeing positive changes in them. It was more than wins and losses, however, I hate to lose. I tried to use sports as a way to make student athletes better people and proud to be a Ram."

Next, Aaron Rose introduced Jeff Bro Olsen as a caring coach, a character, a mentor, and the godfather of Roseau wrestling.

What followed was an unscripted speech by Olsen with some interesting anecdotes about some of the special characters who wrestled for Roseau.

What was left unsaid was how much he enjoyed his years as a wrestling coach with great assistants in Steve Furuseth, Dale Jaenicke, Deano Housker, and Robert Hedlund.

"We had stars like the late Darcy Johnson and many others," he had planned to say, knowing he would leave some out - not all of them stars but like infantrymen who didn't quit - Brad and David Ochs, Steve Wenner and Jimmy Rentfrow, and the very talented like Aaron Rose, Chad Anderson, Nate Hendrickson and Jeradan Otto, who never ascended the state podium.

Some were tough characters like Steve Puttbrese, who turned his life around and became a coach and raised a son who became a state placewinner.

"I'll say it now - and Dale Jaenicke and Deano Housker have said it often - it was the best times of our lives coaching these kids. What a honor!"

Next, Brian Bergstrom, the former Roseau girls head hockey coach, did a fine introduction of Mary Loken Cankar, one of his star athletes who never washed her lucky socks - which reeked - as he underscored how this fine athlete was indeed superstitious.

In her acceptance speech, Mary was graciously thankful, mentioning all her coaches, starting with her dad, Marshall.

"They all will go down in my hall of fame book for being the true trailblazers of girls hockey in Roseau," said Mary, a 2009 RHS graduate who next starred at UND.

She learned to play tough while still in elementary school.

"My dad's only rule was if you are going to play with the boys, you can't complain if you get knocked down. You get back up and skate harder than them. Learn to stand up strong on your skates."

Mary noted that girls hockey locally was once compared to watching paint set.

She thanked her mother frequently and her teammates, trailblazers really, in that five of them were D-1 athletes.

"It is amazing what you can accomplish when you believe in yourself and you work really hard. Strong women - may we know them, may we be them, may we raise them!" she concluded.

Here came Norb Pastir, a Roseau Athletic Hall of Fame coach, to the podium to introduce Todd Hedlund, Roseau's version of Sandy Koufax, a fine lefthander who during high school was honored at the subsection level three different years respectively as a pitcher, a catcher, and an outfielder.

"He was a lefty with the right brain," said Mr. Pastir.

Todd, a 1990 RHS graduate who grew up in Malung, had a knack for throwing strikes and honed his baseball talents by throwing rocks or hitting rocks on the farm in Malung.

He recalled contesting a call by Mrs. Sheila Olson, his teacher, who was umpiring during elementary recess.

Oh, she was having none of that.

"I'm not always right, but I'm never wrong," she said, which got him thinking appreciatively.

Todd, who lettered 11 times in three sports, was recruited to play baseball at the University of Wisconsin.

Shortly after he arrived on campus, he learned they were dropping baseball. They didn't drop hockey, so Todd, who was a standout on the Rams 1990 state championship hockey team, played for the Badgers.

"This is a huge honor," said the middle-aged rock thrower, who never beaned a cow as his grandpa had done when showing off his throwing skills.

Mr. Harris immediately thanked Bryan and his wife, Nancy, for coming to share this special day with him.

Robbie, as he was called in his youth, was the man for all seasons - earning 11 varsity letters.

He talked about some of the hockey highlights.

"My brother, John, and I were fortunate enough to be on the first Gopher team to win an NCAA hockey title," he said.

"I recently asked my mother what her favorite game might have been, and she said it was when John and I each scored in our 2-1 win in the '74 college playoffs that got us into the Frozen Four."

He mentioned the losses too.

"In '69, we beat Warroad to get to State only to lose to them in the semifinals at the Met Sports Center," said Rob, adding that he never had more fun in hockey than playing in Roseau Memorial Arena.

The 1976 Olympian noted that he grew up at the right time - before technology took over.

"I would just like to add. I am so thankful I grew up in Roseau!"

Then, Phil Larson, a player on that team, introduced the team members who were present and then he spoke about that year.

"Wow, 20 years! So many helped this team achieve this goal," he said.

He left out nobody who blew a whistle from Mites to the varsity level and then fondly remarked on their late head coach.

"Bruce was a no nonsense, straight forward, work harder, discipline coach," he said before mentioning this teammates.

"In 1999, we won because we worked very hard, had some talent, and a little luck. But I think our commitment to us as a team pushed us to always want to be the best."

For that March 1990 weekend, they were the very best.

"It's something we can share forever together," he said.