WRITE ON: My Biggest Deer 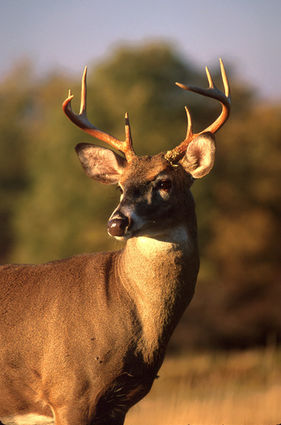 Today: I rose to the sound of my dad scrambling, getting all our stuff ready.  Today is the day I go hunting for my third time. I may have just woken up, but my heart is pumping with excitement.  Without even thinking, I raced to get dressed, brushed my teeth, ate some cereal, and not until I got into the truck, did I realize how tired I was and I instantly fell unconscious, (back asleep!).

One hour later: The shuttering stop of the truck, slightly flinging me forward, woke me up. When I got out of the truck I instantly felt the light, but cold breeze. As I grabbed my stuff. I stood shivering yet I was still warm. The feelings I had were excitement and eagerness! After my dad grabbed his stuff we started to walk to our deer cabin. As we walked the crunching of the grass below our boots broke the silence of the woods. We arrived at our little cabin. The door creaked open as we entered. We put down our stuff and loaded our rifle. As we turned on the propane heater, the switch creaked loudly every time we tried to turn it. After about five times of trying to turn on the heater a flame emerged that shattered the quiet woods with light. Our light was the only light in the woods. This flame instantly subdued the cold I felt, now I sat feeling warm. The first thing I did was slightly open all the windows so if a deer walked out they wouldn't hear it creak, or hear the shutter open. Then I opened my bag, grabbed my 3DS game player, some beef jerky, and sat.

Two hours later: We had been sitting for a long time. It was light out... yet nothing. We had not heard or seen a deer in the entire time we were there. We were surprised because deer always would be here in the morning and at night, but today nothing. The only sound in the woods was the gentle wind. My dad and I were both tired so we decided to go home since it was only about 11:00 and then we would come back later.  So we packed our stuff and walked back to the truck. We had only driven a little bit down the road when we saw a little clump of deer. We couldn't shoot them though because they weren't on our land.   When we got home we decided we would stay for two hours then head back out. As I lay down, I imagined shooting a giant buck. I could feel the gun, the tight trigger, and the way the rifle swayed slightly in the window frame. Then I went to sleep.

Two hours later: My dad woke me up and he was ready to go out again, but honestly I just wanted to stay in bed. But, I got up, and threw myself into the truck, and we headed back. After setting up we just sat there the same as before. On the way back this second time, we didn't see any deer, but it was reasonable because it was right before evening. So we grabbed our stuff and walked down to our cabin.

Two hours later: It was still light out, but getting dark. There was a gentle wind rustling the leaves. My dad and I were ready to shoot a deer, we had our rifle loaded, windows open, because the deer should come out at about this time of day.  Then all of a sudden a doe walked out, I didn't get the rifle out because it was very small. We watched the deer for maybe five minutes when a massive buck came out of the woods.  My dad slowly handed me the rifle, I placed it in the window frame and zoomed in. I'm looking at this buck waiting for it to stand broadside, but it just wouldn't. Waiting another ten minutes, it finally stood broadside.  This was my chance. I aimed right at the heart. At that moment the other deer walked in front. I'm steaming with frustration at this point. These deer are purposely making this the hardest shot ever. We waited. The buck walked back and forth again and again blocking my shot. This went on for another ten minutes then finally the doe walked maybe twenty feet away. I aim in right on the heart and BANG!  The buck fell down to the ground with a thud.  The doe surprisingly didn't run away, confused, she just stood there watching the buck die on the ground.  After a while we walked out to see the buck. When the door creaked open, the doe ran off. When seeing the deer my dad says, "That's gotta be one of the bigger bucks I've seen".  This made me super happy and I also knew that when I went to school I would have bragging rights.

Thanks for reading my story,