IN PURSUIT OF THE "FINAL FIVE" 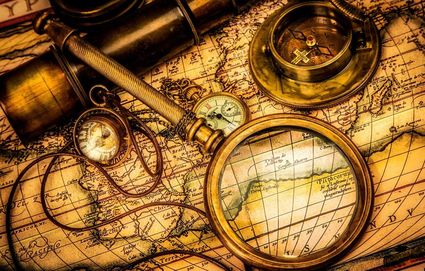 The late Dr. Paul Little, a professor at Trinity Seminary in Deerfield, Illinois, and the author of several books on the Christian life held the view that "95% of God's will for the Christian is already revealed in the Word of God" (the Bible). Pat Robertson from the 700 Club has suggested that 98% of all the guidance you'll need in life is contained in the bible. That makes me a little bit nervous; I think I'll stick with Dr. Little. Both views are opinions (carefully studied opinions)., but I believe that they challenge us to take the bible seriously; beyond the "Gospel" the basic message of salvation through Jesus' death on the Cross for our sins.

Dr. Little held the view that there are many things in life that we don't have to pray about because they are already revealed in God's Word. JUST DO IT!

For example it's God's revealed will in his word that children should obey their parents. This goes way back to the Ten Commandments. The 5th commandment reads" "Honor (which goes beyond obedience) your father and mother. Then you will live a long, full life in the land the Lord your God will give you" (NLT). The apostle Paul picked up on this in Ephesians 6:1-4 and Colossians 3:20, 21 where he also challenges parents, especially fathers to be honorable parents. Now I raise this up very carefully where, in our society, there is so much child abuse.

I make note of the fact that both in the Ten Commandments (Exodus 20: 1-16) and Paul's writing it is God's people who are being addressed. All Scripture has a God foundation (11 Timothy 3:16,17). In fact I hope to be able to show that even the "final five" involves God speaking to us in a personal way through his Word.

On the subject of family God speaks specifically in his Word concerning the role of husbands and wives with each other (Ephesians 5; 20 – 26) although the working out of these relationships will spill over into the final five. Building a solid, lasting marriage should take us into prayer; even before the wedding, and this takes us into the final five percent that is not specifically addressed in the Scriptures: the whom should I marry? You won't find the person's name in God's word (that comes through prayer on the part of both parties), but for the Christian I am convinced that 11 Corinthians 6:10 needs to be brought into the marriage conversation: "Do not be yoked together with unbelievers..." Now as I have mentioned before Paul is not specifically addressing marriage here, but what closer "yoke" is there on a human level than marriage? Julie and I took this scripture very seriously when we were dating. But the potential partner being a Christian isn't the only five percent consideration. It should, however, be the foundation off of which we work as we seek God's "choice" or approval for our life partner.

So how do we determine the final five percent of God's will for our lives which is not specifically stated in the scriptures? As I consider this, three young people from our church come to mind. Just yesterday (10/5/19) Troian Stroot (who just graduated from high school in June) boarded a plane for Australia to prepare to serve with Youth With a Mission. That's a long way from home! Did she discover this specific "calling" into service for God in the Bible? No. But she grew up in a home that nurtured her spiritual life (with the help of the church) which resulted in her "giving her life to Christ" not only for salvation but service. With this foundation God began to speak to her about serving with Youth With a Mission. Now don't hear in this that if you're a Christian God is going to call you into some specific Christian ministry. You can serve God and have a "ministry" in any honest vocation, and God needs a lot of Christians in "secular" work. The young man who influenced me for Christ was an employee at the Boeing Airplane Company in Seattle. I'll always be thankful that God's final five percent for Stan Barker included Boeing. And God got me into Boeing to be ministered to by him.

I'm also thinking of Aaron Krahn from our church who senses God's call to use his athletic abilities to minister to young people in Cecily, Italy, an island off the end of the "boot". At the moment he's having some difficulty getting his visa, but God will address this in a way that brings him (God) honor and glory. You can join Aaron on his journey through this part of God's final five percent for him through prayer. He was set to board a plane for Cecily on the 15th of this month. We'll see what God has in mind (No chapter and verse on this one!).

About three years ago Jayden Acker sensed part of God's final five percent for her life to be serving at the International House of Prayer in Kansas City, Missouri. Now you won't find this ministry or it's location in the Bible, but Jayden found God's dream for her transferred from his heart to hers. With all three of these young people their parents did the heart homework in their lives. They want their children to experience 100% of God's will for their lives including the final five percent.

So how do we discover the final five percent of God's will for our daily living which is not specifically mentioned in God's written Word. I want to suggest four ways (some of you have read these before. But not in this context).

Begin with the written Word of God. The bible is our primary source of spiritual insight for life. It will inform our discovery of the final five percent of his will not specifically stated in his written Word. God's will, will never run contrary to his Word. don't seek the 5% without the 95%.

Providential Circumstances. We need to pay attention to where we are in life. Maybe God has allowed us to get into something as a way of getting us out of it. In reference to the Prodigal Son story which Jesus told in Luke 15 someone has suggested that, "The way back to the Father is through the far country". Might that be true in your life? On the flip side of this coin I've had to ask: "Was it providential circumstances that lead a friend of my dad's to suggest that I seek employment with the Boeing Airplane Company? Was God working with the final five percent? How about counsel from the Godly people who have been placed in your life. Is your posture with them to listen and then pray with an open heart? Or is your posture to "tell" and become defensive concerning that which you have already decided on. Paul Tournier writes: "It was he (God) who made us meet this man, made us hear that remark, read that book, with all the decisive consequences they have had in our lives. We did not perhaps know it at the time. Time has had to elapse to enable us to see it" (from Reflections, quoted in Disciplines For the Inner Life, P. 180).

Engage your Brain! God gave us a brain for more reasons than keeping our head from caving in! We talk about "common sense"; perhaps, at least some times, this is God's sense. Paul wrote in Romans 12:2 "...let God transform you into a new person by changing the way you think..."(NLT). This is the sense we want to bring into the final five percent of God's will. The whole book of Proverbs has to do with thinking right about life; it's God's common sense book in the Bible.

Inward Impressions of the Holy Spirit. This is more subjective but God can speak to us deep in our hearts through the Holy Spirit. I'll bet each of the three young people I wrote about can affirm this. God wants to speak to us in a personal way; this may be especially true with the final five.

Four ways that God uses to reveal his will to us; particularly with the final five. But keep in mind, ALL FOUR MUST BE IN HARMONY: The last three in harmony with God's written Word. If not seek further clarification as you seek to know the "final five" percent of God's will in your life.