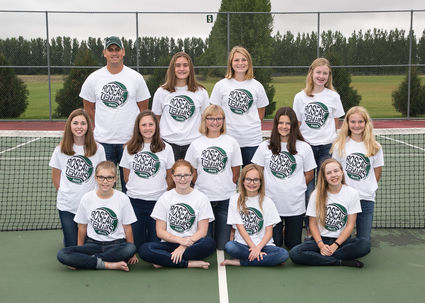 Roseau's Junior High tennis team finished up their season with a busy two weeks of matches and tournaments at the end of September and beginning of October. The hard work this team has put in over the last two seasons really paid off as the junior high Rams were almost unbeatable in the final portion of their season.

At the Roseau Triangular on Sept. 26th, the junior high team had a number of players move up into the JV lineup and the remaining younger Rams saw some tough competition against East Grand Forks to start the day. Roseau was 5-5 against the Green Wave, with Kylie Winkler dominating in her singles matches and Holly Trangsrud/Kali Wibblels winning a close doubles match. In the afternoon contest against Park Rapids, Roseau was undefeated in more than a dozen matches. Kali Wibbles played excellent in singles and Taylor Grill/Quinn Kruger, Ava Hass/Karli Wensloff, and Holly Trangsrud/Kylie Winkler all had multiple doubles wins.

The junior high team got right back to work on Sept. 27th at a tournament in Thief River Falls, where they faced off against the host Prowlers, Detroit Lakes, and Crookston. In a very strong 2nd place finish for Roseau, only Crookston was able to out-point them. Individually, Marissa Glodowski/Emma Johnson finished 1st at 2nd doubles and Karli Wensloff/Ava Hass/Kate Kennedy rotated matches while winning a championship at 4th doubles. Jessie Danielson/Erin Brandt also turned in a fine performance with a 2nd place finish at 1st doubles.

To complete a swing of three matches in three days, the junior high Rams participated in the Crookston Triangular on Sept. 28th. Roseau started the day by going 12-2 overall against Park Rapids. Karli Wensloff, Kate Kennedy, Taylor Grill, and Quinn Kruger led the way with three wins each. The afternoon matches against Crookston were much closer, with the Pirates again edging out the Rams as they had in the Thief River Falls Tournament. Marissa Glodowski had a pair of wins during these matches, including a doubles victory with partner Kate Kennedy, and Emma Johnson/Kylie Winkler and Ava Hass/Karli Wensloff each picked up a doubles win as well.

To finish the year, the Rams hosted East Grand Forks on a rainy Saturday in an indoor match at the Rams Sports Center. Roseau played really well in this contest and finished 11-3 as a team in their matches against the Green Wave. Winning twice that day were Jessie Danielson, Ava Hass, Karli Wensloff, Kate Kennedy, and Kali Wibbels.

The end of season success the junior high team had was the result of working hard, staying positive, and improving each week. It looks like this group of players will continue to have success in tennis seasons to come.