An appreciative veteran returns from D.C. 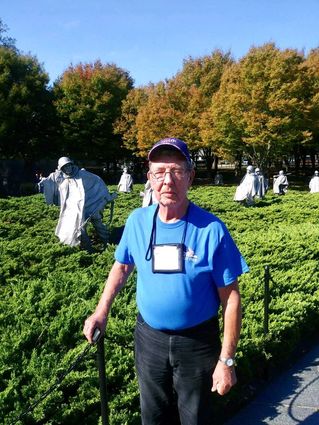 Glenn Iverson standing in front of the Korean War Memorial.

Glenn Iverson, 82, a Navy veteran who grew up in Fargo and enlisted in the Navy in August 1955 for a four year hitch and later lived in Greenbush and now resides in Roseau, was honored to be on the Veterans Flight to Washington, D.C., last Sunday.

He described it as an impressive experience on Tuesday, particularly delighted to have his son, Gregg, a 20-year Army National Guard member, accompany him.

In an earlier interview, Mr. Iverson related that he was a landlocked sailor and saw duty in both Puerto Rico and Turkey.

The senior Iverson was in the Navy from August 1955 to October 1959 and took basic training at the Great Lakes Naval Training Center in Illinois before undergoing further training in California.

"I had a good four plus years in the Navy. I was a communications technician and was a Petty Officer 2nd Class," he said, adding that he spent the next two years at a small naval base outside of San Juan, Puerto Rico.

His final year was spent in Turkey on a base 60 miles from Istanbul.

"I enlisted when I was 17 and got out when I was 21," he said. "I had graduated from Fargo Central High, which is no longer there."

Ever been to Washington, D.C.?

"Yes, I have," he said, and then recalled that he met his wife after his discharge.

"I was in Minneapolis and my friend lined me up on a blind date."

Was it love at first sight?

"On second sight," he said, and his wife, Avis, laughed. She grew up outside of Greenbush and they were married in 1961 at the Oiland Lutheran Church.

Pretty excited about this trip?

"I'm looking forward to it. I've seen a lot of stuff in D.C., but I haven't seen the new memorials. And I'm excited that Gregg is going with," he said prior to the trip.

His son, Gregg, 57, was also looking forward to their joint venture.

"I served in the Army National Guard from 1980 to 2000 and retired as an E-5. I was a mortarman. We were a mechanized infantry out of the Thief River unit," he said, adding that he's never been to the nation's capital.

"I'm pretty excited to be going with my dad," he said.

On Tuesday morning, Gregg was asked why his dad was so straight faced in the photos.

"Dad doesn't smile much. He has a little smirk. That's about it. He had a very good time and so did I," he said, adding that his dad is very conversational and talked with numerous other old veterans in D.C.

He noted that the group, which traveled in four buses, spent a lot of time in the National Archives Museum.

"Oh, a guy could spend all day in there. They have the original documentation of the Declaration of Independence, the U.S Constitution, and other important documents," he said.

"Dad still remembers them from his school days. He started reciting the Gettysburg Address word for word."

For Gregg, his most memorable experience was at the Tomb of the Unknown Soldier.

"We were there for the Changing of the Guard on Sunday. It was raining and they handed us ponchos. All the veterans, no matter if they were in wheelchairs or canes or walkers, were getting wet. It didn't matter. It was just a somber experience," he said. "It just shows what the soldiers themselves go through during the Changing of the Guard. They're there in all kinds of weather."

It was a late Monday for Gregg, arriving home in Malung from Fargo around midnight.

Glenn Iverson admitted to being tired and even sleeping in on Tuesday morning until after 10.

"The trip was excellent and the most impressive thing was the Changing of the Guard at The Tomb of the Unknown Soldier," he said, adding that he had seen that before.

He was very appreciative of everything the event organizers in Fargo did for the Veterans Flight.

"The World War II Memorial was one that I had never seen before. It was very, very impressive," he said, before remarking on the Sunday evening banquet.

"They had a program, and then they had mail call for all the veterans," he said.

"I got a manila envelope stuffed with cards. That was impressive to me. I probably had close to 50 cards in there from various people, a lot of them from here and from others I didn't even know."

It was all first class.

"Everywhere we went, we had police escorts so that we didn't have to battle traffic. There were four buses," he said, adding that nobody needed to push him in a wheelchair.

"I did the walking. I'm still able-bodied," said Mr. Iverson, who remains appreciative of every kind gesture the veterans were shown in D.C. and in Fargo.

"What also impressed me was when we got back to Hector Airport in Fargo. People were all lined up and, as we came off the plane, they were shaking our hands and congratulating us," he said.

"I got choked up, and there was a band there playing all the service anthems. I got teared up."