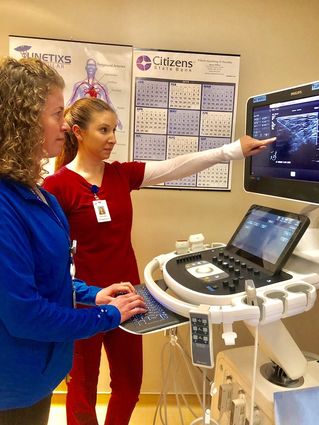 Lisa Mack and Jenny Goodsell are two of the several ultrasound professionals in the Radiology Department at LifeCare Medical Center.

Earlier this month, Lisa noted that she has been doing ultrasounds for eleven years.

While it's painless, an ultrasound can be worrisome.

"There's no squeezing, but they still have the emotions there whenever they have a mammogram and something is noticed, and they come to see me or Jenny," said Lisa.

"They already know there is something there that they need a second look at, and they're concerned."

Their concerns are her concerns.

"They've had their mammograms, and they come here to have a second look. If it's something we can find by ultrasound, then we can biopsy it here with ultrasound," she said.

"Or, if it's something the radiologist thinks is not something he can do here, he will send them to a specialist."

Lisa Mack has her own bedside manner during an ultrasound.

"Hi, my name is Lisa. I usually just go about telling them that something was noticed on the mammogram, but that doesn't always mean it's something bad. Sometimes, it could be a fibroadenoma that is non-cancerous."

She explains to them that just because there's a density there, it's not always something bad.

It could be a cyst. It could just be architectural differences. It could be how the tissue layers are stacking up on each other on the mammogram.

"And so I say, 'I'm going to scan, and the radiologist is going to look at it and talk with you.'

"And then they are relieved because they already know somebody is going to tell them something today," she said, explaining that ultrasounds are read fairly rapidly by Dr. Daniel Courneya, the staff radiologist.

"Since he doesn't want them to have to return for another visit, he looks at them right away," she said, noting that he will examine the ultrasound and also earlier mammograms and/or prior ultrasounds.

Technically, she explained, the radiologist's decision is based on the lesion's appearance and structure, the category he assigns it, and whether there should be a biopsy.

"Most women want to get it done fairly quickly because it relieves their concerns," she said, explaining that a biopsy is usually not done the same day as the ultrasound.

"We do the majority of the biopsies here. When the diagnosis indicates further care, this is decided by the patient and her doctor."