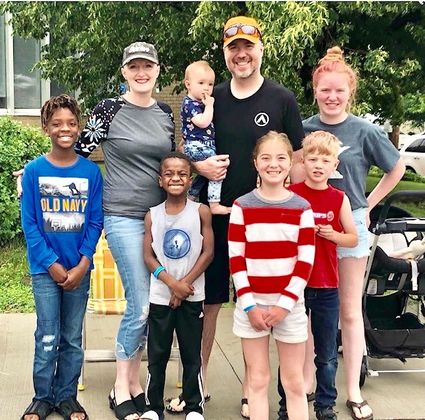 Kate Lundquist remembers it all - too young to have breast cancer, married with children and deciding to move in with her parents last summer, and her children cutting off the rest of her hair before she went completely bald from chemotherapy.

"A time that could have been sad and scary turned into something really special and fun," said Kate, whose parents, Pat and Barbara, both 66 and part-time workers, should qualify for sainthood.

"They have a house big enough for my kids and me, and so we did live there for most of the summer," she said several weeks ago while in Duluth for her chemotherapy treatment.

"It was really hard to come home and say, 'Not only do I have cancer, but can I move in with you next week? And, oh yeah, I'm bringing the kids too.'

"That's a lot, no matter how much they love us. That is a lot to take on for a summer," she said.

"At that time, I didn't even know Roseau had an infusion center. Even if I did, I knew I would need a lot of support to take care of six kids and do cancer treatments at the same time. So, it just made sense to move home for the summer."

There is one other thing. Her youngest is Verabeth, now 14-months-old.

"I was 37 when I was diagnosed in May. It was the middle of April when I found a lump while I was breast feeding my daughter. Thank goodness we had the surprise baby last year. I had a clear exam in December and four months later I had a golf-ball size tumor in my left breast. I wouldn't have found it, I don't think. I wasn't doing self-exams like I should have been."

There have been some speed bumps in her life's highway. Still, she is as enthusiastic as a lottery winner.

"Verabeth was about 8 months old when I found it. I just didn't think it would happen to me. They say if you nurse your children it greatly reduces your chances of breast cancer. I didn't think I had any family history. I spent much of my married life pregnant or nursing. I tried to believe it was something else."

"I waited about two weeks before going in. Some women wait a lot longer out of fear. They don't want to know what it is. A lot of women confide in me now," she said.

"No matter what, I say, 'Get in there and make sure they do a biopsy. You can't be too thorough or too careful.' Especially because the kind of lump I had, it was extremely aggressive. Had I not taken care of it, I don't think I would have a very good prognosis."

Once Kate was diagnosed with Stage 2A breast cancer, she wanted to proceed full speed ahead.

"I wanted surgery right away, I wanted to get this thing off of me, and I just wanted it gone. I was very impatient and scared," she said.

"Actually, the plastic surgeon, of all people, talked me out of that. He said, 'Let's get you treated first. If you were my wife, I'd want you to get treatment first and then surgery.'

"I started chemotherapy the first of June, and my tumor responded by disappearing in 10 days after my first treatment. It was a very rapid response," she said.

"I had such this huge will to survive for my children."

"I will have surgery in the beginning of December, a double mastectomy with reconstruction," she said, adding that her chemotherapy will conclude at the end of October.

She has her unsung heroes.

"My husband, Jacob, has had to take care of the kids and other parts of our life while I fight for mine. He's a great man," she said."

"Shortly after I resigned from teaching, I found out I was pregnant - another surprise baby. We weren't planning it, but we were pretty excited."

"After that, we just realized how badly we wanted to be parents again. We thought we were set with our three," she said.

"We had just been to Haiti and that's what led us to fight for the adoptions of our two sons after we were told that we didn't meet any of the criteria."

Less than two years later, in November 2014, they brought home their sons, Nelson and Maki.

That made five kids until the pregnancy they hadn't expected or planned in 2018.

She calls Verabeth her miracle baby because she detected the cancerous lump while nursing her.

"I was diagnosed in Roseau by Dr. Arshad Khan. I was so scared when I was first diagnosed. He saw me the next day and explained everything to me. He was so patient and so caring. When I had the scans, he knew how anxious I was to get the results," she said. "There was one time he called me on a late Wednesday night, just knowing I would sleep better if I had the results. He was extremely respectful and so caring."

Kate appreciates the care she received from LifeCare Medical Center in Roseau.

"His nurse, Kristin Hodny, was so kind. I was scared and shaken, and she made phone calls and appointments for me and walked me to various appointments at LifeCare," said Kate. "She was a huge support. Both she and Dr. Khan are angels."

Lundquist, who proudly displays her bald head, is looking ahead to a bright future with her family and friends.