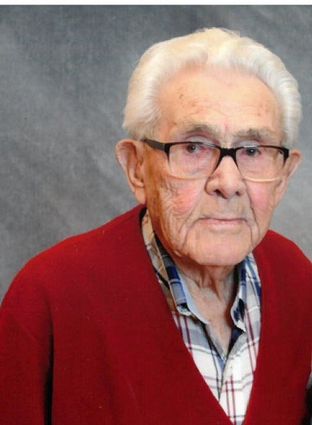 Roseau- Orlen Eidsmoe, of Roseau, passed away on October 17, 2019 after reaching the age of 92 years old. After months of failing health, he died peacefully within the Greenbush Nursing Home in Greenbush.

Orlen was born on July 21, 1927 in Roseau, to Almen and Thea Eidsmoe.  As a boy he lived on a farm in Malung township where they raised cattle and grew crops. He left school at the end of 8th grade to help his parents.

As a very young man he learned to work hard and worked at Hedlund Block Plant and sawing lumber with his dad A.J.

Orlen also enjoyed playing softball and hockey. He was on a Malung softball team along with the Hedlund brothers.

In 1951, he married the love of his life, Gertie Wiskow, and they were inseparable for over 67 years.  They purchased an old farmstead and with Grandpa Almen's carpentry skills, fixed it up to be a beautiful home. The early times were difficult; in 1952, only a year into their marriage Orlen was shot during a hunting accident, while in the hospital Gertie went into labor and their first child was born. Gertie had her hands very full taking care of Orlen and the baby while milking cows and managing life in hard times.

Orlen farmed along with raising cattle, chickens, sheep, pigs and much more. He was an early entrepreneur and engineer as he built the first of three Sawmills in the 60's and had a successful business as a logger and sawmill business owner. In 2015 he built a backhoe from scratch.

In 1970, Orlen and Gertie purchased 120 acres of land in the Beltrami Forest. Orlen absolutely loved this place and he and Gertie spent as much time there as they could. Planting pine trees, building dams, hunting, picking blue berries and of course – logging and running a sawmill!

Orlen loved music and played the Banjo, and Mandolin all by ear. He would play Mandolin while his daughter Lisa played piano. He loved to be with family and was always up for a picnic, reunion or gathering.

He was a good father who always took care of his children and did the best he could to teach and guide them, a loving grandfather and "great-grand" father to many.

Orlen was a strong, proud and good man. He is loved and will be missed by many!

A Funeral Service for Orlen C. Eidsmoe of Roseau, was held on Tuesday, October 22, 2019 at 11:00 a.m. at Helgeson Funeral Home in Roseau. Visitation was held one hour prior to the service at the funeral home. Interment will be held at Salem Cemetery in Roseau.