With the old mechanic who will not quit 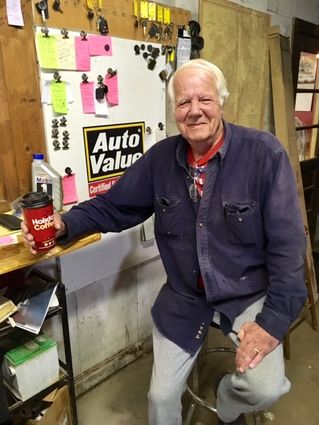 Loren Ballard, 72, was spotted inside his old auto repair shop in Roseau, leaning up against the front end of a pickup, and looking quite content.

Where else would he be?

He's a fixture in this garage.

You can swear by him or swear at him. He flatly doesn't give a sweet damn. He's got his detractors and he's got his admirers.

He has an old smoker's cough. It's deep, almost like thunder off in the distance.

Loren and I go back a few decades or more. When I had rambling wrecks, he'd fix them.

And then when I upgraded, he seldom saw me. A fine friend am I!

One of us is calling it quits first.

He's maybe a step ahead.

"We sold our cabin," he said, mentioning that they've got all sorts of stuff and knickknacks stored outside in a trailer and on tables inside the shop.

Christmas is around the corner. I might find some keepsake to surprise the wife.

Loren should be in the movies - maybe riding shotgun on a stagecoach or working behind a bar.

He's a character and I like characters, especially if they're not totally legit as I'm in that category too.

I remembered that he knows a Catholic nun, so I asked him about her.

There you have it. The tough, old buzzard has an inside track to the Pearly Gates with that nun and her Rosary beads.

He's been in the auto repair business for as long as he can remember.

"I moved over here in 1982. I was in Badger and worked at Cenex before that."

Were you in the Army?

"Nope, I was born and raised in a garage in Badger. I was five-years-old and washing parts for my dad."

That would be Felix.

Suddenly, his raspy cough caught my attention. It sounded like my old man's hacking sound. It was like a death rattle. Dad died from emphysema after his lungs surrendered on him at 67.

My brother later found cigarettes stuffed under his car seat.

He kept smoking even after Mayo Clinic had told him to quit cold turkey on the cancer sticks.

When's the last time you had a smoke?

"I smoked one yesterday morning," he said.

We talked - one old smoker to another. I had quit smoking in 1981 and started chewing Copenhagen and then Longhorn - a cheapskate's version of the good snuff.

The closest I've ever been to Heaven is putting a pinch in my lower lip after eating pizza.

I haven't had a pinch since 2004. Fear does that when your mouth has countless sores called leukoplakia.

My pals, especially Oliver Ullman, know about my last request.

If they find me dying anywhere - on the side of the road or in some joint with bad French fries and stale beer - lying there thinking I should have tipped that ornery waitress more than a nickel - they are to stuff a pinch of Copenhagen in my lower lip and, Sweet Jesus, I'm ready for purgatory.

On that day in early October, Loren pulled out a package of Nicotine Lozenges.

He's trying to quit - only don't push him.

It's a family affair at the garage. His wife, Marianne, their daughter, Karrie Lynn, and their son, Shane, work there, too.

For years, he had a shell of a car perched on top of the lunchroom's roof. It's gone now.

"I could mount you up there, and you could stand there," he said in a moment of mischief.

Then it was back to his dad.

"He had a repair shop, a Standard Oil station, and the motel. It's all still there. My dad was born in 1919.

Back in April, he bumped his head on a car while working under the lift.

"Blood squirted all over. One of the guys ran me up there," he said.

"I took you up there," Karrie Lynn yelled out from the office window.

They did a scan on his head and discovered that he had an aneurysm on his brain. He was airlifted to Sanford in Fargo.

Surgeons took care of the aneurysm, and he was in the hospital for about a week.

And you came right back here?

If he isn't at home, he's here at this garage that resembles a run-away Erector Set.

"In 1982, Jimmy Smedsmo was one of the guys back in that corner with his electrical stuff, Burt Bassett was over in that part with the snowcats, and I worked right here.

"Three of us bought it together. I later bought out Jimmy, and Burt still owns that piece over there," he said, as if he were conducting a tour of a facility that almost resembles an L-shaped ambush.

"I've had a lot of good customers," he said, mentioning that his wife, Marianne, is doing really good since her heart operation.

Oh, he's got the stories.

"A lady stopped by and said her engine was missing. You know, misfiring. So, I walk out there, open her hood and I said, 'Your engine ain't missing. It's still in here.'

"She slammed the hood and drove away. I don't even know who she was. She got mad."

Karrie Lynn takes it all in - the pranks and the one-liners.

"I've seen him pull some doozies," she said. "He had a foghorn wired up to a chair. He had people sit down in that chair, and the foghorn was right above their heads and it would go off."

Then came the fireworks.

"Pam Hetteen jumped up and grabbed Loren by his hair and shook his head. That was so funny!" she said.

It can get monotonous doing the same old, same old.

The foghorn was one of his better stunts.

"LaRae Roseen came flying out of that chair and smoked me in the head with her fist," he said.

"A lot of the Canadians were bringing their friends down so I could have them sit in the chair."

One time he fixed this guy's front grill, which was missing both headlights after hitting suicidal deer on consecutive weekends.

That was maybe 20 years ago.

The bloke went to pay.

It's a true story.

It was my car.