WRITE ON! My Rabbit Story 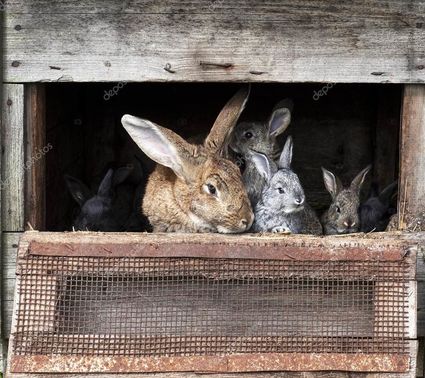 Every time I go outside to see my rabbits, I think, what is going to happen when I get to their cage? This time I was shocked at what I found, so this is my story. But first, I need to give you a little bit of background. I have a female rabbit named Quinn and my brother has a male rabbit named Rocky. We all thought it would be ok to keep them together in one cage since it had a warm hut and a good sized wired cage underneath it. We were wrong since the male wasn't neutered.

One morning I saw something when I went to check on our rabbits. It was a baby rabbit in the wired cage. I was shocked! I didn't know what to do, so I told my family about the baby rabbit. We decided to put him up in the hut and cover him for warmth because it was turning into fall and the temperature was getting colder. Unfortunately after school I checked, the rabbit had died, but I noticed there was a lot of hair everywhere, so my brother and I checked inside the hut. There was a lot of hair in one place. When we moved some of the hair aside we saw four baby rabbits all nestled in a ball.

We never thought this would happen and we didn't have the knowledge to know what to do. But one thing that we did know was to separate the male (or the dad), because a male rabbit could kill its babies. From then on, I cared for the baby bunnies. My family gave a lot of attention to them as well, to make sure they were ok with people. There was a problem with water because my rabbit used a water bottle to drink, but soon I found out they all were using the water bottle, so I had to fill it more often. Once the babies got big enough we found out their gender. We had one boy and three girls.

It was fun raising those rabbits, but I also felt guilty because I had another animal to feed and love which was my cat Mia. A couple months after we got my rabbit we got my cat, and since she was an outside cat, she would follow me around when we did outside things.

We were doing great until I checked the hut. Quinn had another batch of babies. I didn't know this, but you have to separate the male from the female, otherwise you'll have another batch of babies in 28 days. This is exactly what happened to us. We had doubts about these five babies because it was getting colder and our first batch already had hair. Sadly we were correct, after a couple days they died. Well, we weren't that sad that they died, considering that we had doubts from the beginning. Since it was getting cold, we had to sell them when they were 4 weeks. It was hard for me and my brother to give them away, but we knew we had to, so my mom put them on Facebook. The first one that went was our female black rabbit. After the new family got home they sent us a picture which they took of her. They named her Jojo. After a couple days a family came over for one rabbit, but ended up getting two. They went home with our male gray rabbit and the female white rabbit. We didn't get any pictures, but it was ok. Then we got an adopter for my favorite rabbit, but then, because we were staying at our deer camp, the adopter, who lived in Thef River Falls, found another rabbit to get. It took longer to find the rabbit a home, but after a few days we found her a home and I didn't get to say goodbye, because the adopter came pretty early and I was still asleep.

While it was sad to give the rabbits away, there were a few stories that were weird, funny, and frightful. The first story was about the smallest rabbit we had, that was a white female. So, I went to go check on the rabbits and I held this small rabbit for the first time. When I saw that she started peeing on me, I turned her to the side so she couldn't get pee on anyone else. After that, I was always cautious with her. My second and final story is a week before they were adopted I went to go check on them and when I almost got to their cage. I saw something in our shed which was right next to the cage. It was one of our white rabbits which had escaped. I raced to our house to tell my mom and brother. Then I saw that another one of our rabbits was gone. It was under our old pickup truck! So we cought the one under the truck because he was more tame, then we caught the other one in the shed. I hope you loved my story as much as I did writing it. Trina