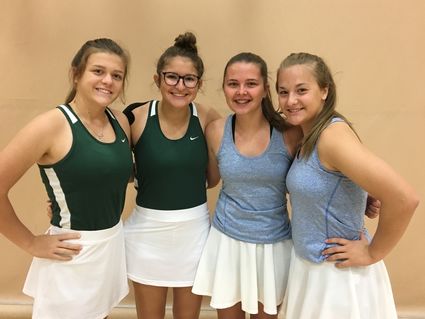 Maddy Verbout, Haylee Bernett, Lindsay McFarlane, and Kiersten Flaig are all smiles before the Section 8A Doubles Tournament

At the Section 8A Individual Tournament at CourtsPlus in Fargo, six Rams competed in the singles and doubles draws. 16 singles players and 16 doubles teams opened match play on Wednesday, Oct. 16th looking to earn one of four spots in the Class A State Individual Tournament.

On the singles side of the tournament, a pair of seniors got their first opportunity to compete in the individual tournament as a wrap up to their tennis careers. Charlene Grahn, the #12 seed, and Olivia Urness, the #14 seed, were both matched up against difficult 1st round opponents. Both girls played very well and kept the matches close, but neither was able to gain an advantage over their opponent and ended their tennis careers with well-played losses.

In the doubles tournament, another pair of Rams got their first taste of the 8A Individuals. Junior Haylee Bennett and sophomore Maddy Verbout, who have been doubles partners for the past two seasons, entered the draw as the #12 seed and faced Perham's top doubles pair of Jojo Winkels and Kiera Radniecki. Haylee and Maddy battled through the first set in a 4-6 loss, but then seemed to lose some steam and lost the match after dropping the second set 0-6.

Juniors Kiersten Flaig and Lindsay McFarlane had a very successful regular season in their doubles matches and earned the #3 overall seed in the tournament. In their opening match against #14 Reghan DeBoer/Maggie Reigstad of Parkers Prairie, Kiersten and Lindsay took control from the start and advanced to the quarterfinals with a 6-0, 6-0 win. The quarterfinal match against Hayden Winjum/Halle Winjum, the #6 seeds from Crookston, was back and forth from beginning to end. After losing the first set 1-6, Lindsay and Kiersten kept up the pressure at the net and won the second set 6-4. In the decisive 3rd set, the girls jumped out to a 5-2 lead with some excellent shotmaking, but they couldn't quite put the match away and ended up in a 6-6 tie. In the match-deciding tiebreaker, Kiersten and Lindsay lost 4-7 after getting down early and being unable to recover in time. It was a tough loss and a tough way to end their season, but the girls fought hard from beginning to end.