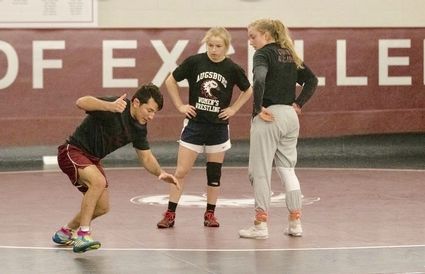 Emily with a teammate being coached on an single leg takedown

You can take all your hockey sticks and pucks, your cheerleaders and fluff, your half court presses and slam dunks, and it's still a toss up of which is the greatest sport.

I remember Johnny Unitas and the Baltimore Colts with Alan "the Horse" Ameche and Lenny Moore, all three of them Hall of Famers from a hard-nosed time in the late 1950s when nobody danced in the end zone after scoring a touchdown.

These guys weren't a chorus line.

They were a wrecking crew, and their job was scoring TDs - not showboating like they had just won the lottery.

Give me Gary Ross any day.