With unchastened thoughts, kill the turkeys! 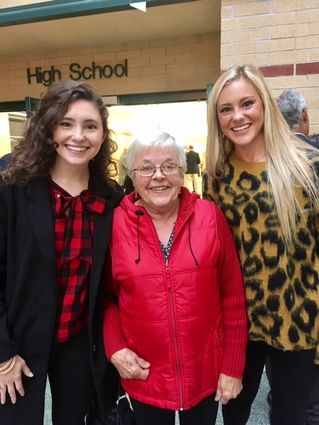 In over three-quarters of a century on this wonderful planet and having written probably two million words or more, this is the first time I've used the word "unchastened."

Live and learn, you old goat!

Wherever my late mother is now, I'm sure she's in heaven picking up after the slobs up there since she demanded that everything be in "apple pie order" or we could go hungry.

She always insisted that her children be properly thankful.

Sure, Thanksgiving is a one-day event and then we spend the rest of the year bitching because life is unfair and the neighbor's dog just took a big dump in the front yard and "Where is my pellet gun when I need it?"

My late mother, Marie (nee Fink - one hundred percent Kraut) Olsen, always said to me, "Be thankful. You could look like your older brother!"

She had a point there.

Just the other day, I thought I was losing my eyesight because all I saw were unattractive women.

Okay, they were suspicious dames holding tightly to their purses, and I complained bitterly that it's probably my cataracts.

Then, as I walked into Citizens State Bank, it was almost biblical.

There was a radiant smile from a terrific blonde - possibly she's a brunette since I'm poor on colors.

A couple of years ago, Erika Vasko seemingly assumed that I was a bagman for some bookie when I asked about some transactions.

Immediately, she mentally started counting the pens on her desk as she had a thief in her presence.

Oh, I was on my best behavior that day.

I have an early deadline this week. Actually, it was this past Sunday, so the pressure is on today since it is Sunday morning.

Today's theme is Be Appreciative!

All you have to do is read the local obituaries and be thankful.

Or go over to the nursing home and visit old pals and old gals, who once danced across the floor at the Malung Hall like Fred Astaire and Ginger Rogers while holding Old Milwaukee beer cans.

As my pal Deano says, "As long as Helgesons aren't parting your hair, everything is just fine."

So, today, which is four days before Thanksgiving, I'd like to mention a few of the really nice people and possibly even some sleds who are the bane of my existence.

My illustrious brother, Rob, used to call people sleds, which piqued my interest.

I asked him for his interpretation of that word probably 40 years ago, and he said, "Chump, a sled is only good for going downhill, and you've been going downhill your entire life."

Let's start with the good and not the bad and the ugly.

There are younger people who surprise us old farts. They're just sweet and don't act like, "Old people smell funny!"

That can happen when you get old and don't catch the telltale signs that it's potty time and you better get your scrawny butt to the nearest toilet.

When it's fifty yards to the outhouse, it's, "Will I make it?"

We come into this world in diapers and some of us will exit it in diapers, but at least we won't have to do the dishes anymore.

That's one thing to be thankful for.

Anyway, not so long ago, here came the decidedly statuesque (clue: I never used the word before) Olson sisters, Amy and Grace, the daughters of Jeff and Sara, who are all grown up.

My present wife, Autumn, looked like a dwarf in the photo as she posed with the young ladies, a good half century younger than she is.

Now, here's the beauty in life.

Little gestures reap big rewards. Many times when I see an old couple or an old dame or some old codger, I stop and chat.

Maybe it's a genetic gift.

My brother, Rob, 77, lives in the Twin Cities and spends one morning a week visiting his favorite nursing home.

He's got a captive audience, but they're thankful for his visits.

He's quite a card and makes them smile and laugh and feel good.

That's life. We only go through it once and it goes pretty quickly.

You don't need many friends since life isn't a popularity contest.

Of all the characters I've met up here in the last 47 years, the top two are Gary Przekwas and Newell Broten.

What a couple of characters, tougher than rawhide and they could have shown Daniel Boone and Davy Crockett a thing or two.

If you want to know how to cook a snapping turtle, skin a jackrabbit, stalk an elusive elk, survive in the wilderness with only the clothes you got on or repel an invasion by hordes of wild Manitobans, see these two blokes.

Newell is an ornery octogenarian at times and a certified local character. I once asked if he was going to a local guy's funeral and he said, "No, because he ain't coming to mine."

That made perfect sense.

I can't say anything about Gary because he once said, "If you ever put me in this newspaper, the game warden will find a poached deer in the back of your pickup."

He said that in late July about 30 years ago. He might have been kidding.

This is a good town with lots of good people, and I'm appreciative of having made their acquaintances.

Some are rogues, a few are misfits, and the majority are just down to earth rascals.

My kind of people.

There's a trick to appreciating the good life, and that's to know those who can do remarkable things like putting on a big feed or who can build just about anything.

Once, I had to take care of my daughter, April, for about three weeks while the wife, who can cook, drove out to Seattle.

It was tough! After about a week, I was drinking more and at the end of my rope.

I thought right away, "My daughter has to go. Maybe someone will adopt her for the remainder of the time."

Finally, I thought on a Sunday at graduation time, "I wonder what Donna and Larry Rose are doing. They're both great cooks."

We went for ride and stopped at their place, and what a feed she was putting on!

Sweet Jesus! Nothing beats having a happy and well-fed teenager - at least for one day.

Talent runs in the family. Their only son, Aaron, is a marvel with any construction project.

Rosey, as I call him when I don't revert to his usual nickname, which raises eyebrows and rhymes somewhat with his last name, is a handyman of all sorts on any building project.

He's the man to hire.

Well, what the hell. If you aren't thankful about something in your life, call me.

I'll do a helluva piece on you and you'll say, "Ma, remember when you used to say that I'm a nobody. That little dwarf, Olsen, just put me on the front page!"