Write On!! My Field Trip Adventure 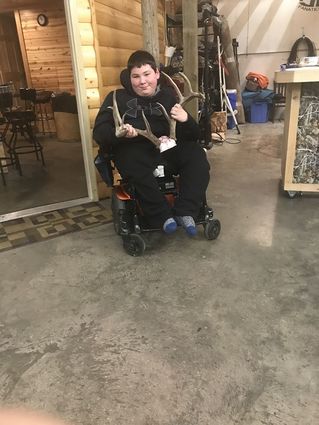 It was a very hot day and we were going to Itasca State Park on a 5th grade field trip. I think it was about 90 degrees.  It was in the middle of May. The teachers made us wear pants that day so we didn't get poison ivy on our legs. The bus was really loud. All of the kids were singing the duck song and they were even singing the spring concert songs. It was really bumpy and it was extremely hot on the bus.

The bus overheated when we were going up and down the hills. The bus had to pull over to the side of the road because the brakes were stuck on.  All the kids from my bus got off and then they rode on the other bus to Itasca State Park. But not me, I had to wait on the side of the road for the other bus to come back to pick me up. They had to call the bus garage and have them send another handicap accessible bus from Roseau to bring me home. The first bus came back so Mr. Goos and Mrs. Sarah lifted me onto the other bus and brought me to Itasca State Park. They made the broken down bus as light as possible so it could make it to the park.  When that bus and the broken bus both managed to make it to Itasca State Park they lifted me back in my wheelchair so I could finally join my class.

By the time I got there all the classes were already on the tour. I went looking for my class. I did not find my class, but I did find one of the other classes so I just went with them until lunch when all of the classes joined back together. At lunch my friends and I sat at a table in the shade.  I ate my lunchable and I shared my donuts with all of my friends. It was so hot everyone had to stand in a huge line to refill their water bottle. Some of the kids even considered filling their water bottle in the bathroom sink to avoid the long line. After lunch I went with my class for the rest of the trip.

We went to the headwaters of the Mississippi River and played in the water to cool off.  The water was freezing but it didn't matter to us because it felt so nice after being so hot.  I filled my extra water bottle with sand and water from the mighty Mississippi to take home and show my family. All of the 5th graders had to pose in front of a huge tree stump for a picture.  We busted out our biggest dab move.

The bus was still broken and the other bus that I was supposed to ride had not arrived yet, so I was able to stay an extra hour at Itasca. They let my friend Titus call his parents to see if he could stay with me until the new bus arrived. We got to see stuff that no one else was able to see. We got to see a weird museum thing that was really cool.  It had a bunch of animals and facts about Minnesota. It also had different feathers and eggs from different birds in the area. We also got to go on a bunch of different trails. Some of them were the trails I missed while I was waiting on the side of the road and others were new ones the other kids didn't get to see. We also saw an Indian burial ground. The burial ground looked like piles of dirt. There were purple and white flowers.

Once the mechanic Mark and the not broken little bus got there, Mrs. Sarah, Titus and I rode the new bus and Mr.Goos drove it.  We had all the windows down and it was still so very hot. The good news is the teachers decided to never make the kids wear pants again, the bad news is we had to learn the hard way.  Mr. Goos felt so bad for us so along the way he stopped in Bagley and bought all of us ice cream. He bought us snowman ice cream. It had 3 different kinds of ice cream. His hat was chocolate, and each snowball was a different flavor.  One chocolate, one strawberry and one was vanilla. It was the best ice cream I've ever had because I was so hot! The other kids made it back to the school at about 4:00 and we finally came back at about 7:30. It didn't start out as a very good day but at the end it turned out to be a super fun day.