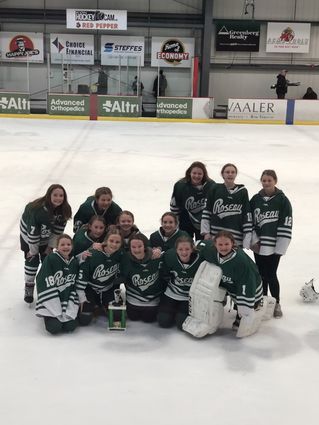 Submitted by: Roseau 12UA Roseau's 12UA were on the road to Grand Forks over the weekend for the Grand Forks Angels Tournament.

First up were the Winnipeg Titans, Roseau won 2-1 against a good Canadian Team.

Next up was East Grand Forks, Roseau came out with a dominating 7-0 win. Kira Remick made her goalie debut and earned a shut-out in her first career start!

The girls ran into a hot goalie for their third game of the weekend against Grand Forks. They put a lot of shots on her, but came up short, losing 3-1, and placing them into the 3rd place game.

The third place game against...