His Christmas Spirit is Creatively Contagious 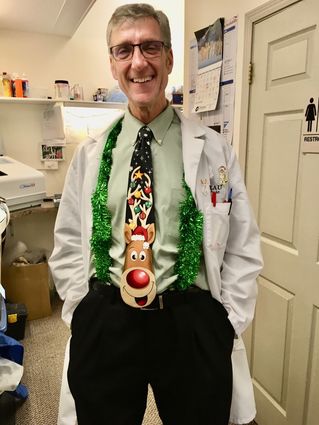 He is one of Santa's tallest elves and stands out like Rudolph the Red-Nosed Reindeer.

His green tinsel suspenders were handmade by his wife, Jacquie, who usually shops for his Christmas ties.

With Christmas less than a week away, Robert was definitely in style this past week at the Roseau Optometric Clinic.

He stood tall wearing a Christmas necktie while fashionably attired in his white lab coat adorned with Santa Claus and little angels.

As a kid, did you write Santa?

What was the biggest present you wanted that you didn't get?

You weren't writing letters to Santa at that age?

"Oh, probably not," he laughed. "But I do remember wanting a new Polaris Colt. It was THE snowmobile."

The Roseau transplant recalled a few years earlier and writing Santa with an urgent request that would have weighed down Santa's sleigh.

He never got that Arctic Cat.

Ever ask for a train set?

"We always open gifts on Christmas Eve after we eat. Santa Claus is for Christmas Day," he said.

Robert, 58, is the perfect person to shop for.

"There's nothing that I don't like. A gift is a gift. It's always good. Big or small. For me, I think Christmas is more about snow than even the gifts."

He was home last weekend to McGregor, Minnesota, where the snow is about knee deep.

"It was hard to find the woodpile because there's over two feet of snow," he said.

Roseau is his weekday home.

"It's so unfair that they get all that good snow down there because they don't know what to do with it. Not like us up here. Send that stuff up here. We have fun in it!"

Robert was on a roll.

"There's nothing that drives me more crazy than seeing Chicago during a snowstorm. It's just wrong. They hate it. They have no appreciation for it."

Get your wife's present yet?

What do you think it is?

"It's gotta be a wind chime. She's a little goofy because it's like, 'How many wind chimes can you have, Jacquie?' Just like me, I can't have enough dirt bikes and snowmobiles," he said.

He was remembering his childhood.

"I came from a poor family. I never got that Arctic Cat," he said, and then it was back to the present.

"My wife just loves wind chimes, and we have like six of them on the front of the house that make noise, and it drives our kids crazy. I'm used to them, and it makes her happy. Whenever it's a calm day, it's a nice day."

What is Jacquie getting you for Christmas?

"Well, there are so many things on my list that it's not hard for her."

Mr. Robert Honstrom will definitely be home for Christmas in McGregor.

And let it snow!