COUNTDOWN TO CHRISTMAS, Part 2: GOD ADDS ONE TO THE CENSUS! 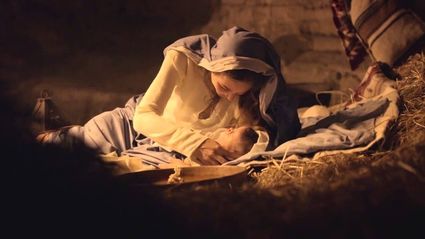 I think it's safe to say that if you do Christmas, however you define, "do," it is a time for Special Surprises. Children may whisper in Dad's ear: "Don't tell mom, but this is what I got (or made) for her for Christmas." It's a time for disguising plain brown boxes with brightly colored paper. Maybe even putting boxes inside boxes to disguise the shape or size of a gift to make it a bigger surprise.

Christmas is the time for sneaking under the Christmas tree to shake certain gifts in hopes of guessing what's in there. But when it comes to God's Gift to us, it's the Gift that shakes us rather than the other way around. Let's look into this in Part 2 of Countdown to Christmas.

My primary source for this article is the book of Luke who was a medical doctor and became a friend of the apostle Paul. Luke was not on the scene when Jesus was on earth. So what was his Gospel based on? He tells us at the beginning of chapter one addressing his "letter" to a Greek friend of his by the name of Theophilus. Luke was writing at least 30 years after Jesus was resurrected and returned to heaven. Here's what he says: "Many people have written accounts about the events that took place among us. They used as their source material the reports circulating among us from the early disciples and other EYEWITNESSES of what God has done in fulfillment of his promises. Having carefully investigated (a doctor would have the mindset to do this) all of these accounts from the beginning, I have decided to write a CAREFUL summary for you, to reassure you of the truth of all you were taught"(Luke 1:1–4, NLT). So I'd like to invite you to keep this in mind as we look at what the Christian Church has come to call, "the Christmas Story." I would also like to invite skeptics to spend some thoughtful time reflecting on Luke's introduction. It has serious implications for your life. It may change the "Ho, Ho, Ho of your Christmas to Oh! Oh! Oh!"

Luke tells us that a young Jewish girl by the name of Mary (most likely a young teen) "who was engaged to ....a man named Joseph, a descendant of King David" (that's important; especially if you're Jewish) had the everydayness of her humble life turned upside down, or maybe more accurately, downside UP! She got visited by an angel. And not just any angel, He introduced himself earlier to a Jewish priest by the name of Zachariah this way: "I am Gabriel! I stand in the very presence of God" (Luke 1:19). do you believe in angels? Have you ever encountered one" You may have and didn't even know it. The writer of Hebrews alerts us: "Don't forget to show hospitality to strangers, for some who have done this have entertained angels without realizing it" (Hebrews 13:2). Well, Mary knew it, and was, as the Message puts it: "...thoroughly shaken: (Luke 1:29). Wouldn't you be upon finding yourself in the presence of an angel who, between earthly assignments, "stands in the "very presence of God?" When what we say we believe touches down in our life we can be shaken. All of a sudden we realize through personal experience that God knows us by name! Gabriel attempts to calm her down: "Don't be frightened, Mary." Yeah, right! I like the way the J.B. Phillips translation puts the angel's response: "Don't be afraid, Mary; God loves you dearly" (Luke 1:30). Shortly we'll discover that Mary loves God dearly.

So as you probably know, Gabriel makes the announcement: "You will become pregnant and have a son, and you are to name him Jesus. He will be very great and will be called the son of the Most High" (Luke 1: 32). Mary might have said any number of things, but what she did say was: "But how can I have a baby: I am a virgin?" Mary is committed to sexual purity outside of marriage; God's desire for every single girl and woman! And we read in Isaiah 7:14: "behold a virgin will conceive, and bear a son, and call his name Emmanuel" (KJV). Now some people want to argue against the virgin birth (I met a pastor once who did) by pointing out that the word "virgin" used here simply meant, "young woman." But Gabriel clarifies the point for us. He answers Mary: "The Holy spirit will come upon you, and the power of the Most High will overshadow you. So the baby born to you will be called the Son of God." That's why Jesus is called "the son of God"...For nothing is impossible with God" (Luke 1: 35,37).

Now look at Mary's response; she puts her life on the line for God and challenges the rest of us: "I am the Lord's servant, and I am willing to accept whatever he wants. May everything you have said come true" (verse 38). I want to invite you to spend some serious, reflective time with this teenage girl's statement. Ask yourself: "Am I willing to say this to God with open heart and hands? What does God have in mind for you no matter what your age and particularly if you're young? And are you willing to make this commitment even if it might bring about some real tough circumstances?

Nine months into Mary's pregnancy: "At that time the Roman emperor, Augustus, decreed that a census be taken throughout the Roman empire... All returned to their own (or home) towns to register for the census. And because Joseph was a descendant of King David, he had to go to Bethlehem in Judea David's ancient home." Little did Augustus know that he was cooperating with God at the time he called for a census: "but you, O Bethlehem Ephtathah, are only a small village in Judah. Yet a ruler of Israel will come from you, whose origins are from the distant past" (actually, eternity) (Micah 5:2).

So Joseph went, taking Mary with him. Maybe Mary faced too much ridicule for Joseph to leave her in Nazareth. Try and explain a virgin conception to the community! Luke 2:6; "And while they were there, the time came for her baby to be born .: Oops! Bad timing, God! Recently Julie, our daughter Londa, and I had the chance to chat with Bill Fisher while we were at Mayo. Some of you may know Bill. He used to be the pastor of the Bethel Covenant Church. During our conversation Bill said something I'll never forget: "There are no "Oops" with God!" I think he's right; even when we discover that he had his Son born in a cow shed because the local inn was sold out because of the census. The "neighborhood" didn't even notice the birth that night, but God did, and some shepherds will. God added One to the census that night, but not just to the Roman Empire but to the whole world, and maybe, like myself, you've added that One to the census of your heart!

Mary and Joseph did what they could. Mary wrapped their son in clothes, and placed him in an animal food box. Little did she know that some day her son would be referred to as, "the Bread of life.."

So as you know God decided to make the birth announcement through some shepherds on the hillside. Fox News would have loved to pay special honor to the birth of Jesus but they weren't around yet! Shepherds didn't have a very high standing in their society, but they did with God. He sent them an angel with the birth announcement: "Don't be afraid! He said. I bring you good news of great joy for everyone! The Savior yes, the Messiah, the Lord – has been born tonight in Bethlehem, the city of David...You will find a baby lying in a manger, wrapped in strips of cloth. Suddenly, the angel was joined by a vast host of others – the armies of heaven – praising God: "Glory to God in the highest heaven. And peace on earth to all whom God favors'" (Luke 2:9b-14). After the angels left, the shepherds agreed that they should check it out. So "They ran to the village and found Mary and Joseph. And there was the baby lying in the manger." It wasn't "fake news!: So they went back to their sheep rejoicing, and proceeded to get the word out. And eventually the news got to you and I. Thank you, shepherds!

I'd like to close with the line from a Christmas song that was done as special music at our church recently. It brought me to tears. The writer of the song imagines Mary holding her newborn Holy Son, and looking down at him in her arms, she says: "You made the world before I was born, and here I am holding you in my arms." May God's GIFT of his Son continue to shake you!