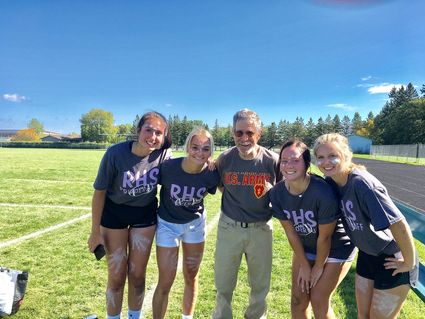 For all the champs and chumps in this world, I could play the curmudgeon and include a whole column on who's aboard Bro's Coal Train, which is loaded with Lumps for Chumps.

Oh, good Lord, where do I start?

If I had a guest columnist in this spot this week, I'd be at the top of his list and would have to hide my homely mug for at least a week.

But then I remembered what my dear mother used to say, "Always say nice things, Jeffrey, since you are a flippant little scamp and words do hurt, you little fart."

Okay, Mom really didn't say that. She is dead these last 10 years, and forever a Sugar Plum of this world.

Right now, many of you are slamming your heads against the chimney wondering why this little agitator hasn't mentioned Trump, McConnell, Pence, Donald Trump Jr., and that misfit, Stephen Miller, as recipients of coal lumps.

There are any number of local folks who definitely belong on the coal side of the ledger.

Why waste ink on negativity since nobody who has appeared with the Chumps has ever called me and said, "Bro, you' are right on, dude! You put me in the spotlight. You're terrific!"

No, they wanted to see me hit by a truck, poisoned, stomped on, spit on, and thrown off the tallest building in Roseau - alas, just three stories if that.

And so, this Christmas, none of these deviants will be carving up the turkey with malicious thoughts that I'm that turkey.

Hey, Merry Christmas, all you nutcases who thought I could never behave.

Donald J. Trump - He sucks all the air out of the room while screaming fraud, hoax, insulting that Swedish teenage girl who is the 2019 Time Person of the Year - and not him - and making America look bad.

If he chokes on a turkey bone on Christmas Day, there is only one suspect. Elizabeth Warren. God bless her.

Hillary Clinton - What a total Mrs. Scrooge! On the 2016 campaign trail, she was always scowling and acting like she was privileged. Had she run any kind of campaign with humor and class, we wouldn't be in this mess. I could have run the Thunder Bay Express (the Greek), and he would have been sensational.

The only problem is, he's a Canadian. But what the hell! If you listen to the right wing media, Obama is a Kenyan.

And he won! Just think if the Thunder Bay Express had trounced DJT. He'd have a whole team of Huskies patrolling the White House grounds. With very sharp teeth!

Daryl Foss - He's a great guy. I put him here because he drives around town with those blue Trump signs on each side of his rambling wreck.

Bobby Byfuglien - Another interesting character who proudly wears his red MAGA 2020 cap. I like Bobby. He's friendly, but he felt hurt when I told him what I'd like to do with his cap.

And now for the rest of the coal recipients in no particular order: Rudy Giuliani, my bookie who keeps putting the squeeze on me, Hazel (the dame who stepped on my toes at the supermarket - all 315 pounds of her - and never apologized as she was reaching for an entire stack of DiGiorno pizzas), and Mike Pence (I've never seen a vice president with a perpetual smile like he just passed gas as he applauds the president).

And now, let's celebrate some very nice people - at least in my opinion - who make this world a much better place.

Ann Olson - She's the best English teacher in the history of Roseau High School. Ms. Olson is the Meryl Streep of educators and a total professional. What really demonstrated her great heart was her moving and amusing eulogy for the late Dan Jones, another star educator.

Shirley Miller - In early December, she sat in Mattson's waiting for her prescription. She greeted me with a warm smile and never once clutched her purse as if I were a thief. She's a keeper!

Brad Zoeller - Once, he was like a symphony to my ears, broadcasting games on the radio. He was simply the best. Once, he was taping a rather wild interview on Greenbush wrestling when I intentionally misbehaved by saying a very bad word. The Z-Man could have cried.

Mary Preteau - The Roseau High School secretary is one for the ages with her wonderful laugh and an occasional hug if I might deserve one. She is a touch of class anywhere she is. She could work in an autopsy room and put a smile on the stiffs.

Father John - The local Catholic priest did a very nice thing recently, and it caused me to genuflect and say, "Holy, Sweet Jesus! The old padre is a very nice man." I've always believed that you can get to Heaven on good works alone. He's definitely on the right path.

Marge Przekwas - She's old school and believes in feeding any old stumblebum who stops by to chat. What a gal! She has a heart of gold and is a good, solid Democrat, who grew up during the Great Depression and knew really hard times.

Kevin Johnson - He's an old grease monkey who gives you the straight scoop on whether he can fix your vehicle. If he can't, he's got some quick tips on what can hold it together for a stretch. A helluva guy, and his wife, Marie, is good people, too.

Olga Markovich - She's 97 and is a regular in this annual Christmas column. A pretty sharp old girl, she keeps up with who's good people and, in my book, she's top shelf.

Jimmy Stordahl - The old trucker and talented three-sport athlete, now in his late seventies, is about as humble a guy as you'll ever meet. He's just a good citizen, fan, and human being. He's a gem.

Denise Hendrickson - If generosity is a virtue, the old girl is well on her way to raking up honor points with the good Lord. She's definitely from the old school where they used to write letters and send cards to mark special occasions or just to keep people on their toes.

High School Girls - If you walk into an area school, they smile. That's really special when you are a certified old goat. Thank you, Girls!

And now, in no particular order, here's the list of the Sugar Plum Gang, the champs in this life - some are true reprobates and some are just regular folks.

Leading off for the other Champs are: Stacy Rose (tougher than rawhide and very cute), Sister Sunshine, Carrie Johnson (who works magic with an editing pen), the Hovda brothers - Tyler and Tanner (never dull and real characters), Meryk Bro Ullman (that is his legal name and he's my Godson, if not officially), Blondie, Dean Mattson and his crew, Taylor Warne over at the 10 items or less checkout counter at SuperOne (he's very helpful and about the friendliest chap I've met in the grocery business).

Hold that a minute. My present wife just looked over my shoulder and said, "What about Gary Grondahl? He's always nice and friendly!"

I can't argue with that. If you're not on this list, you will be next year as a champ or a chump.