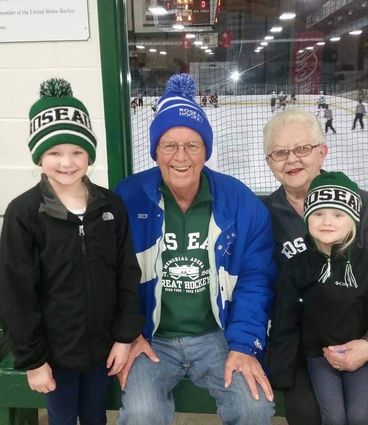 This was the last day Dick was at the Roseau Memorial Arena, and he dropped the puck for the Dick Johnson Peewee A Tournament in 2015: Dick and Gail and their two great-grandchildren, Ava and Lyvia

Richard "Dick" Johnson, a talented athlete and a revered and occasionally feared Roseau peewee hockey coach for four decades while following in the tradition of Bear Bryant, Bobby Knight, and perhaps even General George S. Patton, died this past Sunday at age 81.

Mr. Johnson had been in failing health for several years.

•Terry "Gotzy" Gotziaman, the retired RHS principal and athletic director, reflected on the legacy of an original local legend.

"Dick was a coaching icon at the state level and was the Herb Brooks of youth hockey," said Gotzy.