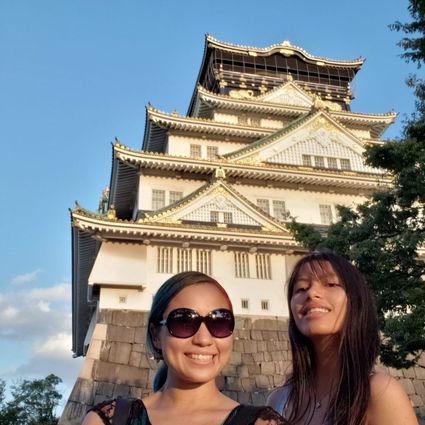 Linka and Gabby In front of a castle in Osaka, Japan

Oh, she knew she wasn't in trouble.

She originally hails from Puerto Vallarta, Mexico. A little over a year ago, she arrived in Roseau and loves it here.

She was in the office to visit with Mrs. Kelsey Johnson, the assistant principal, who appreciates students who overcome real challenges.

By the time Gabby was six-years-old, her mother, Maribel, had died of colon cancer, and her father, José, had died unexpectedly.

That's when her journey started on both sides of the border.

"I came to the United States when I was seven. Then, I had to go back to Mexico to live with my grandmother, Salusta," she said.

"So, I've been here two years if you count this one and the year I was in Texas."

She was informed that she has very good English skills.

"Oh, thank you," she said, adding that her sister, Linka Moreno, lives in rural Roseau.

"I came up here a year ago in January," said Gabby, mentioning that she works as a waitress after school at the Silver Dragon in Roseau and that the tipping is very good.

Gaby is someone to be envied.

"I want to go to Japan again," she said, explaining that her sister is 28 and works at Polaris. They had traveled to Japan and South Korea last year.

It's been a big transition for Gabby, who knew just a little English when she arrived.

It isn't hard to learn English with good help and lots of practice, which is right up her alley.

"She's really nice, and her Spanish is like really good," said Gabriela. "She speaks the Spanish that I speak."

Are you getting A's and B's?

"Yeah, A's and B's, but sometimes in History and Geometry, I have like a D or something. I'm bad at math and history."

Do you call your grandma in Mexico?"

Then, the question was asked about the weather.

"It's really cold," said Gabriela with a lilting laugh.

She's a well-adjusted teenager, who is doing pretty well in school, works as a waitress, and likes her classmates.

"They are really nice," she said. "I live out in the country and ride the school bus."

Who's your bus driver?

"I don't know his name. He's really nice, though," she said.

"What are your plans after high school?" asked Mrs. Johnson.

She does know one thing for sure.

"I'm definitely staying in the United States." She never once said, "Estados Unidos."

Gabriela appreciates the opportunities here and hasn't experienced any discrimination in Roseau.

She mentioned one of her classmates, Autumn Dimich.

"She's a good friend," and then turned her attention to her World History class, one of her tougher classes.

"Mrs. Miller is really nice. I love her class. It's just that I'm bad at history," she said with a disarming smile. Gabby has no trouble reading English textbooks and was told she is a gifted young lady.

"Thank you," she replied.

Did you enter the U.S. at the Mexican border?

"No, Canada. My sister didn't want me to have troubles because I was traveling alone. She picked me up in Winnipeg."

That was in January 2019, and she now has other Spanish speakers to chat with.

"I have two classmates in my ESL class who are from Puerto Rico. Their English is good."

Gabby Moreno added if it's necessary for a follow-up interview, there is a perfect time.

"My Geometry class is 7th hour," she whispered with merriment.

"Now, you can add that she has a very good sense of humor," said Mrs. Johnson.

She has a great smile, has friends, and is happy.

"I like all my teachers. They're really nice and are good teachers."

She laughed when asked if she came from a small village.

"It's much bigger than Roseau," she said.

Mrs. Johnson described it as a tropical paradise.

So, Gabby comes from a big city, a resort town with a population of more than 200,000, but she is delighted to be here in Roseau.

"No matter what, she doesn't let things get her down. If something doesn't go well, she's willing to try again. She can let it go and keep working, and she's very motivated."

Mrs. Engen credited Gabriela's older sister for encouraging her while highlighting the relationship between Gabriela and her older sister, Linka.

"She's her sister but also kind of a parental figure. Her sister only wants what is best for her and truly just loves her," said Mrs. Engen.

Much later on Wednesday, Assistant Principal Johnson paused to reflect on Gabriela Gallaga-Moreno.

"Gabby is one of those girls that you notice a mile away. Her huge smile is electric and her positivity draws you towards her," she said, noting that Gabby's life story is remarkable.

"Here is a girl who lost both of her parents at a very early age, went back and forth living with various family members, immigrated to the U.S. to live with her sister, and has had to integrate herself into a new country, a new culture and a new school all before her seventeenth birthday," she said, adding that Gabby is a strong girl.

"Most of us won't experience that much adversity and overcome those many obstacles in a lifetime," said Mrs. Johnson.

"She works hard, she is kind, and she has found a home here at work and at RHS. We are so happy that we have the opportunity to have a student like Gabby in our school. We can all learn a lot from her, and RHS is a better place because she is here."