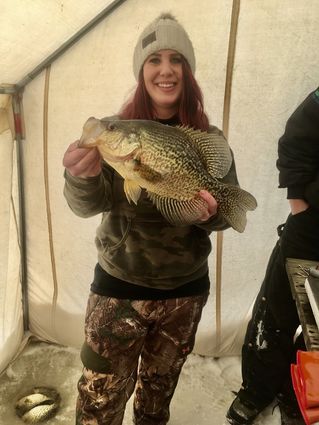 It was nearly impossible to spot a grumpy angler at Hayes Lake State Park last Saturday.

Hope springs eternal, which goes well with the Wannaska Lions, a fine bunch of gals and guys, one of whom, Lyle Roseen, resembles the late Gabby Hayes, the old western sidekick. in the 1940s.

Out on the ice, it was tent city - a rainbow of colors and colorful characters of all ages.

"No," he said, adding that he didn't catch a fish at last year's derby either.

"We went fishing on Lake of the Woods earlier this winter, and I caught a 25-inch walleye," he said, and smiled when told it wouldn't help him at this fishing derby.

He was actually hoping to catch a bigger fish.

Nat Henderson was spotted walking away from the "The Coach" - aka, the soup wagon - with a bowl of chili.

"I was in third place for a while, but now I'm in fifth," she said. "I caught one monster - a perch, all of four ounces."

She had caught three fish, the biggest was a 1 lb. 8 oz. northern.

Nat is a lifer at the Wannaska's Lions Club Fishing Derby.

Not everyone came to fish.

"We just rode in on snowmobiles," said her dad, Nate Roseen. "They're Polaris, of course!"

Inside the Wannaska Lions' big white tent out on the ice, somebody had won the lottery.

Samantha Abrahamson, 29, had just caught a crappie, which tipped the scales at 2 pounds, 3 ounces and measured 16 inches. What she had was the eventual winner.

She was so excited that she said a very familiar expletive, commonly said when one sees flashing lights in the rear view mirror.

"This is pretty sweet! This is awesome!" she said, almost dancing a jig while holding her crappie.

"My fiancé is Steven Olson. He owns Olson Repair in Skime," she said, "So, bring your stuff there."

Are you a mechanic, too?

"No, I'm a hairdresser in Roseau," she said, and headed out to catch another Big Mama.

Outside the tent, Bryan Sorenson, the president of the Wannaska Lions, declared it a grand day for their chief fundraiser.

Farther out on the ice, Lisa Dickson looked like a fashion model for the Hudson Bay Store.

"I've been a welder at Polaris for 25 years," she said, donning a fashionable coyote cap.

"It's an awesome place to work. I plan on retiring there," she said.

It's not her first derby.

"We do this off and on every year. It's a hit and miss kind of thing. We decided to do it this year."

Her coyote cap was hard to miss.

"I got it at Annie's Trading Post. I've been wanting one of these for a long time."

Informed she was wearing a fine hat, she said, "And it's warm."

She never mentioned catching a fish, but it didn't matter.

"I just like being out here and buzzing around on the snowmobile. It's a lean, mean, green machine. It's one of a kind and brand new," she said. "Actually, I'm borrowing it from Polaris."

She was with her son, Devon, 14, a freshman in Grygla.

Brian Olson was smiling as he stood outside his tent.

"This is my first year out here, and I caught a fish," said the Roseau native, adding that Adriana Korgel, a friend, caught two, and his son, Jordan, had caught one.

"I just decided to come out and try it," he said.

Less than a hundred yards away, Paul Von Ende, 56, reckoned it was his fifth year in a row.

"No fish, but it was a good day. I got a little prize," he said. "It was worth the money coming in and joining the family."

The Von Endes of Badger were well-represented last Saturday.

Consider Jedd Von Ende as one of those who sees the glass - or can of beer - half full.

"Fishing was awesome. The best fishing I've had all year," he said.

How many did you get?

"I was fishing, not catching".

All around him were Von Endes of various ages, all of the girls pretty, but none of the boys wanting to be called pretty.

Those are fighting words.

"We've had a great time," said Jedd. "This is an annual tradition. Fishing is great, catching sucks!"