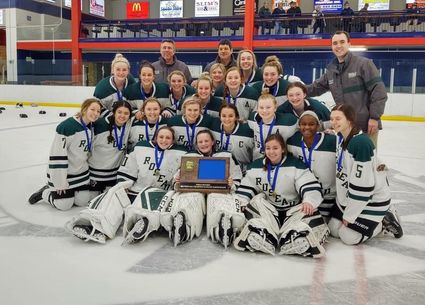 After defeating Bemidji 8-1 in the quarter-finals, the Rams Girls hockey team knocked off Buffalo 7-3 in the semi-finals before beating arch rival Brainerd 6-3 in the championship game on Friday, February 14th. The Rams had home ice advantage in the first two rounds by virtue of securing the #1 seed in Section 8AA. The championship game was played on neutral ice in Bemidji.

Roseau returns to the State AA tournament for the first time since 2017. The Rams will face off against #3 seed Minnetonka at 1:00 pm on Thursday, February 20th at the XCEL Energy Center in St. Paul. Roseau is 21-5-2 this season and currently on an 11 game winning streak.

The Rams earned the # 1 seed during the regular season by going 8-1 in Section 8AA play. The only section loss had come in Buffalo back in December by a 4-3 score. The Bison were the #5 seed and knocked out #4 Sartell in the first round.

In this game, Memphis Mertens made it 1-0 Roseau just 1:29 into the game with assists to Celine Stroot and Jordyn Bergstrom. The Bison's star player Jada Habisch tied it later in the period. But then Kayla Santl scored from Mariah Huglen and Kate Helgeson and the Rams had a 2-1 lead entering the 2nd period.

Memphis Mertens struck again in the 2nd period with assists going to Jordyn Bergstrom and Savannah Byfuglien to expand the lead to 3-1. And then with 6:25 left in the period, Sophie Helgeson made it 4-1 with help from Mariah Huglen and Kate Helgeson to close out the scoring in the middle stanza.

The Bison narrowed the score to 4-2 just 23 seconds into the 3rd period on a goal by freshman Raegan Wurm. The Rams then put the game away with three consecutive goals. First, it was Kayla Santl from Sophie Helgeson and Mariah Huglen to make it 5-2. And then less than three minutes later it was Kate scoring from Sophie and Kayla. Kayla completed a hat trick in making it 7-2 for Roseau with a shorthanded goal from Sophie Helgeson and Anika Stoskopf with 1:37 left in the game. The Bison added a power play goal with just 32 seconds on the clock and the final was 7-3.

Jada Pelowski had 17 saves on 20 shots faced. Isabel Varner faced 36 shots and made 29 saves. Buffalo was 1 for 5 on the power play while the Rams went 0 for 1.

While the Rams were beating Buffalo, Brainerd was eliminating Alexandria to set up a familiar collision course in the Section 8AA championship game. The brief history is that Roseau beat Brainerd in a 4 OT thriller in 2017 in the 8AA finals. Brainerd returned the favor with a heartbreaking 3 OT win over the Rams the next season in 2018. Brainerd then repeated as champs last year by beating North Wright County in the final game before advancing all the way to the state championship where they lost in double OT to Edina. Roseau was 2-0 vs the Warriors this year entering the championship game. The Rams had won 3-2 at Brainerd on December 13th and then again 3-2 in OT in Roseau on January 31st.

Neither team scored in the 1st period but the Rams opened a 3-1 lead after the 2nd period. However, it was the Warriors who actually grabbed a 1-0 lead on a goal 2:43 into the period. Kayla Santl answered with a huge goal 22 seconds later to even the game 1-1. Kayla scored again, unassisted, at the 7:24 mark to give the Rams a lead they would not surrender. Ginevra Johnson made it 3-1 for Roseau with 3:46 left in the middle period with assists to Celine Stroot and Memphis Mertens.

With ten seniors playing possibly their last game for Brainerd they expectedly came out with a fury off the face off in the 3rd period. Sophie Robinson, who will play at Dartmouth next season, closed the gap to just 3-2 with 12:54 still left to play. However, Kayla Santl increased it to 4-2 just 1:26 later with an assist to Kate Helgeson. And then only 42 seconds later it would be Kate scoring from Kayla and the lead increased to 5-2 for Roseau with 9:46 left on the clock.

With 3:24 remaining, Brainerd star Gabbie Smith tallied a goal to close the gap to 5-3. But with Brainerd pulling their goalie and throwing everything they had the Rams way, it was Kayla answering in a big way with an empty net goal from Anika Stoskopf with 41 seconds left making it 6-3 and the victory was pretty much sealed at that point.

It was another in a line of exciting games between two good teams in Section 8AA. But this time it would be Rams nation doing the celebrating. Roseau outshot Brainerd 31-27 in the game. Jada Pelowski had 24 saves while Breya Sawyer made 25 saves for the Warriors.

- Roseau's Kayla Santl was a Ms. Hockey semi-finalist this season and has amassed 85 points heading into the state tournament.

- Santl, Anika Stoskopf, and the Warrior's Gabbie Smith will be teammates at Bemidji State next year.

- There was a "send-off" fundraiser for the Rams at Gene's in Roseau on February 17th. Rams backers turned out in great numbers and as usual were very generous. The Rams are extremely appreciative of everyone's support.