Write On: My Fishing Accident! 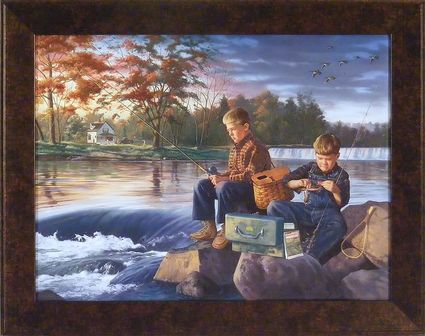 It was a hot, sunny afternoon when my friend and I decided to go fishing on the Roseau River. Later, we found out our going wasn't such a good idea. So this was the time when me and my friend went fishing on the Roseau River. The bank of the river was really muddy and wet, and we both stood on this little pallet thing not wearing boots. We had our good school shoes on.

Later, I realized that standing that close to each other was a bad idea.

I cast my line out and got a bite but I missed him so my friend cast his line out, and when he did, he hooked me in the back of my head! We didn't have a knife so we had to go home, cut the line, and then go to the hospital. It was a miserable experience, with the hook in the back of my head. It hurt a lot because of our car bouncing around on the gravel road. We pulled up to the hospital then I had to sit in the waiting room for 10 minutes before the doctor arrived. Waiting for the doctor was the most suspenseful and nerve-racking thing because I didn't know how pulling out the hook was going to feel. How he was going to do it? Would it hurt?!! When the Doctor told me how he was going do it, it didn't help, because how he described what he was going to do, sounded like it absolutely would hurt! Earlier, when the doctor walked in, he asked what happened. I told him what happened. He then gave me a shot where I was hooked in the back of my head. This was the worst part because it hurt very bad. First he cut around the hook then pushed my head into the pillow and started yanking on the hook with pliers. It was the weirdest thing because I couldn't feel anything because I was numb, but I could hear them cutting and pulling on the hook.

But when he snipped it out, I felt like an idiot. I had made a fuss because of my fear. I thought it was going to hurt. Thankfully, I didn't feel a thing.

When the doctor was done, I didn't know I was bleeding, but when I got up there was blood on my face and on the pillow.

When I got home we ate, then my friend and I went back out fishing. After a while, my head started to hurt so we went home. Because we were by the river, I couldn't take medicine for the pain. When it started to hurt, it was one of the most painful things I have ever felt, because he had used a knife to cut the hook out. Later when I felt better, I went to a friends house to hang out and spend the night.  It was a lot of fun until in the middle of the night my head started hurting again, and I couldn't sleep.

Now, I am fearful sitting in a boat when other people are casting. I usually don't fish or I just bobber fish.

The worst part of this story, is on the day I got hooked in the back of my head, we didn't catch anything. No fish, so overall it was just a very bad day. BUT...the next day we went fishing again and we did pretty well so that was fun, BUT... we were way more careful!

This Activity is made possible by the voters of

Minnesota through a grant from the Northwest

Minnesota Arts Council, thanks to a legislative

appropriation from the arts and cultural heritage fund.