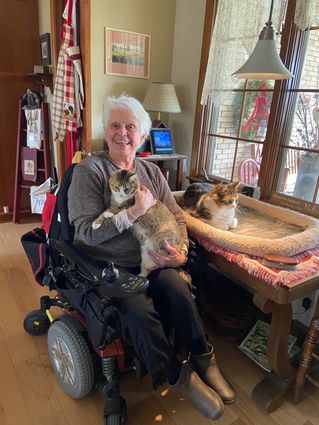 Marcia holding Molly and Joe on the table.

At 74, Marcia "Mars" Folland, a delightful character and retired educator who never knew anything but crutches and leg braces as a young tomboy peppering passing cars with snowballs, reflected recently on her life as a polio patient.

"I've had a wonderful life," said the 1963 Greenbush High School graduate, whose memories of being afflicted with poliomyelitis are family lore.

Marcia, a 1945 model, only remembers what she has been told.

"My sister and I were both taken to a doctor in Thief River Falls and the first question he asked my dad was, 'How much money do you have?'