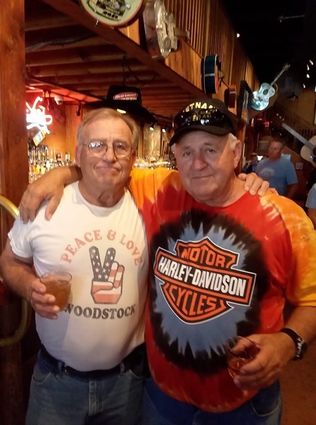 Jerry and Dave Nelson at 2019 reunion in Nashville

Jerry "JC" Cleveland, who volunteered for the draft to honor a hometown Staples pal who was killed in Vietnam and later fought there himself as an infantryman and earned a Purple Heart, has done his share of fighting outside of at least one Bemidji bar.

Additionally, he served as the dean of students at Cass Lake High School where his car was stolen by two students who put some sizable dents in it before abandoning it.

Near daybreak, the two lads ran as fast as they could to surrender to the nearest cop once they spotted Mr. Cleveland approaching them after they came out of a swamp.

At 70, he has a great laugh, even better stories, and takes everything in stride.

"I've got kids from 52 to 18, and I got a Dear John Letter over in Vietnam," he said, mentioning that he and LuJean were high school sweethearts.

"She was the best looking girl in our class, and I can't blame her for the Dear John Letter because I could have married her right away after high school."

She was pretty and pregnant, and he admits he wasn't very mature at 17. So he went off to college to wrestle at Itasca Community College.

"I thought we'd get married after I got back from Vietnam," he said, reflecting on a life that has been both wonderful and tragic.

The Staples area farm kid wrestled for the legendary Don Dravis when there was only one class.

He was the state runner-up as a junior and took third as a senior at 133 pounds and is someone to appreciate when the odds aren't good.

For example, he was middle-aged when he exited a Bemidji bar one evening and came upon two thugs beating up a smaller guy.

He thought it wasn't a fair fight and said so. They attacked Jerry, who KO'd the first chump and then worked over the other one before launching him head first into a dumpster.

He's built like a bank vault, has weighed as much as 225 pounds but is now down to 185, and credits growing up tossing hay bales.

"I weighed 85 pounds and I was throwing 85-pound bales. I didn't need to lift iron."

He turns 71 in November and won't ever forget his classmate, Roger Jensen.

"He got killed over in Nam while I was a freshman in college."

The 1967 Staples High School graduate entered the Army in January 1969 and arrived in Vietnam in June 1969.

"I had only been there about six weeks when I got wounded in the middle of July," he recalled.

An incoming rocket could have killed him. He was airlifted to the Long Bien medical facility.

"It was a head wound. That's why I'm so crazy. A traumatic brain injury," he said, noting that he was serving with the 199th Light Infantry Brigade in the Bien Hoa area.

With a new medical profile following several weeks recuperating, he got a different assignment and was flown up to Quang Tri near the DMZ and north of Hue.

"I got assigned to 57th Trans and I was a gunner on a gun truck. That was pretty good duty because I slept in a barracks there," he said, adding that he rode in a vehicle in which his responsibility was manning twin 50 caliber machine guns.

Charlie, of course, were the VC, the Viet Cong, Victor Charlie, and Mr. Charles when they were bad asses.

"We were about 7 miles from the DMZ. I lost a close friend, Frankie Quinlan, to an incoming rocket," he said, recounting how after he'd been with his new unit for a stretch, an Iowa kid, Dave Nelson, learned that Jerry had been a Minnesota wrestler.

"Right there in the sand, we wrestled," said Jerry, remembering that it was a helluva match and they became fast friends because Jerry more than held his own.

That war was a lifetime ago.

The biggest surprise is that he isn't a bartender or a longshoreman but a teacher.

JC, get your degree as a flipping gym rat?

He can quote Shakespeare, and reads more good books than a librarian.

He became an English major only after his adviser noticed he was taking creative writing and upper level literature classes while planning to be a phy ed teacher.

"My adviser told me to major in English. Best advice I ever got. Male English teachers who were coaches were guaranteed jobs," said the Hall of Fame wrestling coach.

In 1978, he was hired to teach high school English at Cass Lake High School.

It had been 11 years since he graduated from high school. So, he wasn't some pup teaching probably the most unpopular high school subject in America.

Oh, they learned! But then opportunity knocked when the previous dean of students went home for Christmas vacation and never came back, which is understandable since Cass Lake High School isn't Minnehaha Academy or some suburban school.

It's located in the Leech Lake Indian Reservation. These kids make good athletes because they don't sleep on silk sheets or are chauffeured to school in limos.

"Cleveland, you can handle these kids," said the principal. "Why don't you come into the office and be the Dean of Students?"

He took the job, went to classes in St. Cloud and got his principal's license two years later.

He's a septuagenarian who is looking ahead to an empty nest. His youngest, Dylan, 18, will hopefully go off to college unless COVID-19 screws things up.

"When Hedi and I got divorced, Serena was seven and Dylan was five," he said, explaining that his second wife, an attorney and considerably younger, allowed him custody of the kids.

Periodically, Jerry is in contact with his oldest son, Kim, whom he never raised.

JC has been married three times and has a perfect record of three divorces.

"I was married to my first wife, Barb, twice," he said. "Our daughter, Venessa, was killed in a car accident. She was 20 years old. Her mother really struggled, and she died shortly after that. That was a bad year."

He noted that their son, Sam, is 46 and doing well.

It had to be asked all these years later what he thinks now of the Vietnam War.

"I kind of wish we hadn't been over there. I lost some friends. There were a lot of people that had a tougher time in Vietnam than I did. I wasn't getting shot at everyday," he said. "A lot of guys had a real tough time, and I admire them for their effort. There wasn't any winning. It became a survival test. I was one of the lucky ones, and many were not."

He won't ever forget.

"I have been to the Wall a couple of times. That is quite the experience. Both of my kids, Serena and Dylan, have been out there. It's very impressive."

For years, Jerry didn't keep in contact with his old comrades from Quang Tri.

"We had our 50th anniversary a couple of years ago in Bemidji. That was crazy," he said. "It was a great time with the guys from 57th Transportation Company. I've been to about six of them in a row."

The 50th reunion was at Schummer's Back Woods Bar & Grill in Bemidji. 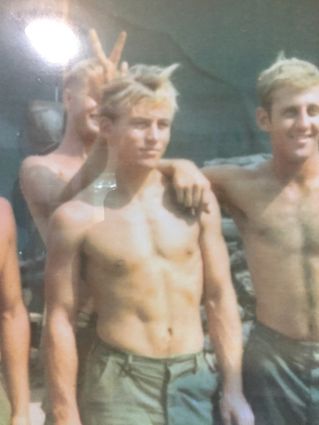 Jerry and Dave Nelson in Quang Tri, Vietnam, in 1969

"The guys said it was the best reunion they'd ever had. Maybe there are 20 of us still making them," said Jerry.

"These guys were impressed. They served us a great big meal, we sang karaoke, and we had a great time."

Paul Schummer, the owner, was looking out for the old vets.

"I got a bus coming to take you back to the hotel so nobody has to drive," he told the crew.

"You don't know how much I like veterans," Cleveland remembers Paul saying. "My brother died over there in 1967, and I appreciate what you guys are doing."

Jerry "JC" Cleveland was touched by the real meaning of Minnesota Nice.

"We probably racked up a $1,500 bill, and he wouldn't take a dime. Paul and Alisha are great people with big hearts!"

Jerry's kind of people - and he's in that class, too.