Write On My Football Accident by Michael Furguson 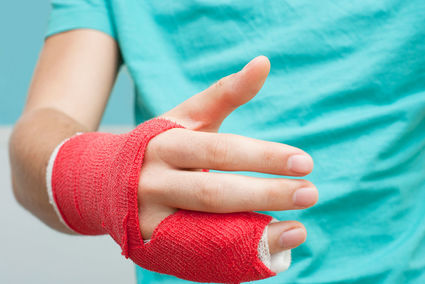 It was the last game of the season I played defense for the 7th grade football team. It was cold and raining outside but we still went and played football. When it was time to play I was called on the field to play defense. I went to my position and got ready to play so a couple games later I was called out again to go on the field to play defense.

When we started I got hurt so many times. When I tackled someone, my finger got caught in a jersey or something, I don't know how It broke it didn't hurt at all. I didn't feel any pain so I went and showed my coach. He thought it was dislocated my dad came to see what happened to me so he took me to the hospital to get it checked out. I went to get it x-rayed. After the x-ray they told me it was broken so they had to put it back in place.

They numbed my finger, it hurt when they did that, it hurt very bad. Then they put the bone back in place, after that they wrapped my fingers together and I went to the x-ray again to see if it was straight enough to heal but it wasn't so they had to redo it again. They unwrapped it and straightened my poor finger even more and wrapped them together again.  After this I went to the x-ray again and it was straight enough to heal so all was all done. The doctors said it would take a month to heal.

When the doctor came back he said my next appointment in Grand Forks would be in two days. Finally it was time for me to go home. When I got home I ate dinner and after that I took a shower and than I went to bed. Two days later I had to go to Grand Forks for my appointment. My mom and I got in the car to go to Grand Forks. A couple hours later as we were driving, the roads became slippery. The car started to slide and we crashed in a ditch. Luckily there were people behind us and they helped us get out of the ditch so we continued to drive.  Looking back, the whole experience would never be forgotten. We were very thankful when we reached our destination. The End.