Don't mess with the conservative side of this trucker 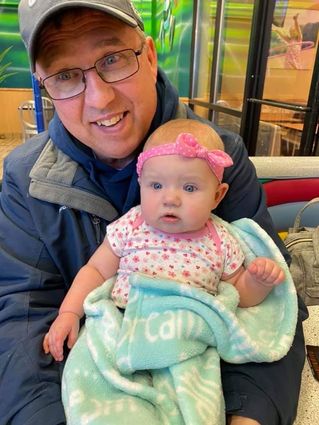 At the half century mark, Dean Housker no longer has the svelte look of a marathon runner.

The former roughneck, who made his living in the North Dakota oilfields for five years, drives a big rig for Foltz Trucking and admits it's tough to keep trim.

"I'm getting fat, he said, adding that he tips the scales at 225. Prominent bellies come with pregnancies and trucking.

A man has got to eat, and that's been tough lately in the hick towns, truck stops and big cities from Canada to the Florida Panhandle.

Come along for the ride.

The man is a spellbinding storyteller and a homespun chronicler.

"Oh my! You should see that. Some gal just slipped in-between me and another rig. Damn! It looked like Helgesons would have parted her hair."

Then, he brought up his favorite topic, explaining that it has been tough finding a greasy spoon joint where the waitresses aren't necessarily pretty but they know a pretty good deal with the daily special.

Then came another big concern.

"Some places where I make my drops won't even let me come inside to use their bathroom," he said the other day while on the road heading north through Indiana to the Michigan border.

"What am I suppose to do? Tinkle on their loading dock?"

He is performing essential tasks these days during the pandemic, almost always on the road delivering everything from dog food to barley to toys.

"I drove for Byfuglien occasionally while I was in the oilfields in western North Dakota," he said, adding that he worked on a drilling rig.

"You start off as a worm. You can't get any dumber than that, and then you're the floor hand - he does all the grunt work. Then you move up to motor hand on the loader - plowing snow, loading and unloading trucks, and all the generators are your responsibility," he said, noting the top three positions are derrick hand, driller, and tool pusher (the top dog).

It was a good life until oil prices plummeted like a low flying duck on opening day.

"We were all roughnecks, even the worm," he said. "A crew is five or six. I was working for Hess and, the last two years, we were drilling for Conoco."

What was the pay?

"We worked two weeks on and two weeks off. It was pretty good money. I made about $2,500 a week take home."

Last week, he provided commentary like a tour guide.

"You didn't want to be on the road trying to find something to eat in April and May. Now, it's starting to loosen up a little bit," he said.

"For about six weeks, all you could try to do is get a hamburger. If you stopped someplace, you couldn't go in and order. You had to go through the drive thru."

"You can't go through the drive-thru in your (expletive) Reeboks!" he said, adding that he tried ordering and then walked behind a Chevy Blazer to pick up his order.

He left empty-handed. They wouldn't serve him.

He can laugh about it now.

"When I last left home I went to Kansas, then I brought a load down to southern Texas, then over to Port Arthur and then hauled that load up to Perham and then I grabbed a load in Detroit Lakes and brought that up to Ontario and then brought another load down to Lebanon, Tennessee."

"I hauled a load of mustard seed from Drayton to Pleasant Prairie, Wisconsin," he said.

"I just loaded barley in Manitowoc, Wisconsin, and I'm hauling it to a beer brewer in Michigan."

Ever get any freebies?

"Sometimes, you can get dog treats at a dog food plant. At the mustard plant last month, I gave a little Mexican a bottle of water. He was outside working in the heat."

They all know Dean at his usual unloading stops. It's a ringside seat to different dialects, mostly Southern twangs.

The Mexican gentleman, he noted, appreciated the water.

Oops! He just said several very bad words. This happens when, as he calls them, the (bleeping) idiots don't realize that they could be getting their hair parted by some mortician when they swing in with just inches to spare as he is cruising at 70 mph.

He didn't grow up rich or pampered, so he's been hustling since he was a kid, delivering papers and keeping his nose clean.

He was a welder at Polaris and drove truck for Marvins.

I left the oilfields in 2015. I had heart surgery seven and a half years ago. I was off for four months. Luckily, I had good health insurance, but what I did not have and didn't know it, was short-term disability. I had zero income. By the time it was all said and done, I owed a little over $100,000."

"Couldn't do that," he said, adding that he has since paid it off in full. 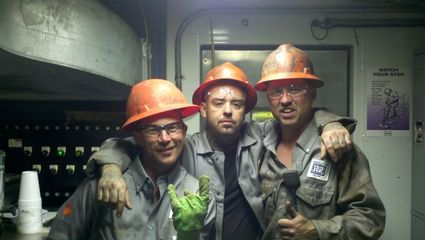 These days, he swears by the Volvo semi.

Anybody flip you off in that big truck?

Yes, these truckers deliver all our toys and essentials - from toilet paper to tarpaper to Tylenol.

"They just don't want us on the road with them," said Mr. Housker, who still had miles to go before calling it a day.

He was asked what he enjoys about trucking.

"I like the Southwest, the Northwest and the Northeast as far as scenery," he said and then paused.

"But really, the best is going home."