Londa Lou is an Artist Too! 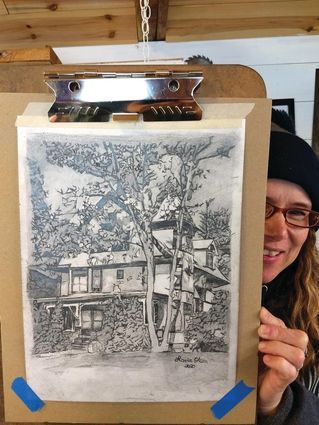 We will miss the fair this year.Going from food vendor to food vendor, with a bag of warm Mini Doughnuts to begin with, then there are the ice cream cones at the 4-H place run by committed 4-Hers. This stop happens two times a day.  Joe always calls it "grazing".

I have had a booth displaying my art, now shared by our daughter Londa Olson. Oh my, can she draw! Graphite is the media, lights and darks keep the image under control. You can transfer an image many different ways, I have had fifty four years to try them all! There are projectors, and light boxes. You can grid your paper off, you can trace, you can even close your eyes and surprise yourself with the mess you've just made. (Grin) BUT, if your lights and darks are not perfect, you can lose the whole thing. If a face is too light in areas, the image will look puffy. If the image is too dark, it will visually suck in the face of the person you are drawing, completely changing the face into somebody else. It is a very temperamental situation to draw, or to paint a portrait.

Londa has both endurance and persistence with anything she attempts, she is not a quitter. Hurdles, endurance, determination, and dedication are four words that describe Londa's life. When Londa was three years old. I was sitting behind a one way mirror watching little Londa and a nice lady. They were sitting in chairs on the other side at a medium sized table. The lady had a clipboard with a pen attached, and I think a book she was referring to. Londa always (usually) had a smile on her face with two upper teeth missing. She had lost them falling over an unseen cement well cover. Her two front teeth were completely knocked out, but since they were her baby teeth, there were two others waiting to grow in (in their good time). So, back to my story, the lady told Londa to say 50 ta-ta-tas. She wanted to find out Londa's endurance and see if she was ready for speech therapy. She sat there and then Londa started saying ta-ta-ta-ta-ta ...she said about 20 (the lady told her she would tell her when she could stop). After the 20 "tas", that little Londa got out of her chair, and unsolicited, ran into the center of the room and jumped up and down for about 30 seconds. She then ran back to the table and did 25 more. That told us a whole lot about the core substance of our little girl. The challenge of having a 60 decimal hearing loss in both of her ears, and being trained to say and hear what she didn't say and hear, is a feat in itself. This was met with a positive attitude and determination.

Londa has a eye disorder called Retinitis Pigmentosa. Testing, and case studies are being done at Mayo Clinic and other research facilities to find help and a cure. (RP) is a rare, genetic disorder that involves a breakdown and loss of cells in the retina, which is the light sensitive tissue that lines the back of the eye. Common symptoms include difficulty seeing at night and a loss of side (peripheral) vision. In dealing with this disorder, Londa hasn't allowed her eyesight from stopping her daily walks with kitty Buttercup, or her art.

After graduating from North Park College, Londa ran the Portland Marathon once, and Duluth Grandma's Marathon two times. She also ran a 5K marathon in Minneapolis. Preparation for this intense assault on your body is mammoth. This was where we saw her dedication.

Teamwork has been one of the successes of Londa and Marlin's marriage. Working at Alive Outdoors was a team effort. Londa at the front counter and Marlin managing. Working there for 11 years was both fun and a challenge.

When Marlin decided to retire Londa came to me and said, "I am looking for something to do". Little did we know how much artistic talent she had. After a few pointers she took off like a rocket. In one year she was doing portraits, which is the most difficult thing to do. We worked together for a bit, I obtained some barn wood from Darrin Smedsmoe and made her some frames. Marlin had made a little cabin out in their woods called the "Upper Room" which she turned into a studio and now spends time there with her drawings, and with the "Olson" grandkids who are over often, learning how to draw. Marlin has taken on the adventure of framing her art work. He is using many different applications with his finishing methods. One of them is Shou Sugi Ban, a beautiful charred black burnt wood finish. Marlin and Londa make a wonderful team. Hopefully, we will be back at the fair next summer. Sitting in her "Upper Room" cabin or at home, she is producing more than one drawing a week! This is how she has ended up showing her work both at the Holiday Craft Show here in Roseau, along with her making awesome coffee at her booth (Londa's Latte's), and at the Roseau County Fair. She also has recently placed her work at Tonnabells in Thief River Falls.

The substance of a person's soul is complex. People, situations, their environment, sorrow and love bring that substance into focus for some to see. But there is still much more waiting to surface when life creates the opportunity. The foundation of Londa's soul is Jesus Christ, whom she invited into her life at a young age. She seeks to be guided daily by the Word of God. Being Londa's mom is a gift and a privilege. If you haven't personally met her, I really hope you will. I am sure you would be added to her "important list" of people whom she loves to keep track of. She may even invite you over to "hit the trail with her and Buttercup, the family cat. For some Upper Room fellowship. You'll have a "high" time!