With The Groovy Great Granny from Roosevelt 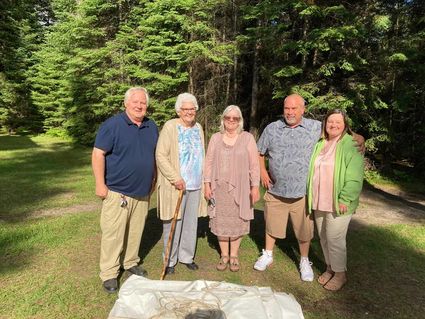 Talk about a touch of class! Some dames just stand there and take up space. That does not include Evelyn "Granny Annie" Peterson, who puts a smile on life.

She was hard to miss out in the boondocks at the Penturen Church in the Beltrami Island State Forest on Friday, June 19, for an afternoon wedding.

Evelyn, a rural Roosevelt native who grew up during the Great Depression, is no shrinking wallflower at 89.

Her daughter-in-law, Judy Peterson, had mentioned that Evelyn is a very private person and shuns publicity.

But she's a bonafide character who stands out in any gathering with her pizazz, spunk, and delightful personality.

Welcome to Evelyn's world, which has seen heartaches and high times.

Oh, she can talk!

"I was born south of Roosevelt out in Oaks Township at my grandparents' farm. I was delivered by Dr. Leech," she said by phone on Monday, June 22.

There were eight kids and she was the middle child.

"I was the spoiled one," she said.

Her oldest sibling, Danny, died from heart trouble at three and a half. Her sister, Bessie, was the second oldest, followed by the twins, Margaret and Marcus.

"The twins were seven and a half years older than me. That was in the Depression, and my dad, Andrew Olds, lost his farm in North Dakota and moved up here to Minnesota."

"Four years after I was born, they had three more girls, one every year," she said, adding that her mother, the former Bessie Hopkins, lived to 95 and a half.

"We got to run pretty wild," she said, remembering how she walked through the woods to her grandparents' place.

"The roads were practically trails, and I went to a one-room school, Grovers School," she said, noting that the Grovers had given the land for a school to be built.

"It was three and a half miles from us," she said.

Ride to school on a billy goat?

"I drove horses after the big kids left home," she said.

By then, she was the big sister, but not even a teenager.

"I'd hitch up the horse and take the young kids to school. We had a barn at the school. The fathers had to bring hay, and us kids who had horses had to clean the barn and take care of the horses in the middle of the day and then drive them home."

"In the wintertime, I'd get old Billy harnessed and ready. A neighbor had built us a really nice buggy and a really nice cutter," she said.

One particular winter morning, old Billy apparently didn't appreciate having to wait around.

He just took off.

"We had to walk to school and there was Billy. He knew where to go," she laughed.

"He'd always wait for us when I went in to get the little kids. But that time he didn't wait."

"When I was 14, I had to stay in town and work for Reuben Norton and take the bus from Roosevelt to Williams for high school," she said, adding that she got her first taste of modern living.

"I had electricity and a bathroom. My mom never had that until they moved to Iowa."

She laughed when asked her age when she got married.

"I was 18 and a little brat," she said, about her marriage to Cecil W. Peterson, a fine provider and gentleman.

"He worked a lot of jobs in his life, including Polaris. He worked at Marvins until they burnt down. So, he went to Iowa and worked at a dairy for a year. In the meantime, the kids and I were still here because I didn't want to move to Iowa," she said, noting that she went to work at Thermo-Lite on the east edge of Warroad, working there for six years making thermos windows. After a year, Cecil joined her at Thermo-Lite.

"Jerry is the middle child. He is a lot like me," she said.

She has forgotten nothing.

Evelyn always wanted a daughter but never expected one.

"I didn't think I could have a girl. I wanted girls and I had two boys and I figured she'd be a boy."

The plan was to call the third baby Andrew after her own dad.

"We were going to call her Andy," she said.

Where's she at these days?

"A lot of people have girls and never get along with them, but Deanne and I were pretty much attached," she said.

"She'd been married a few years, but we were pretty close. I enjoyed every minute of her life, and she's still with me."

Then came another mother heartache.

"In '92, Johnny died. He was a teacher in Park Rapids. He and his wife had a nice house on the lake. They both had diabetes, and his kidneys and heart and stuff gave out."

Just like that, ten years apart, she had lost two of her children - one at 24 and the other at 43.

There are no guarantees.

She has this indomitable spirit, is full of life, and appreciates those who have touched her life.

She worked for Polaris for 13 years, and then she went to Marvins for 16 years before retiring.

"I haven't gotten rich, and I could have worked longer. I felt good."

She is the eternal optimist.

"I've had a good life. Yes, I have. No complaints. I had good kids, and Jerry is such a good kid."

Then, she chuckled about her being a private person.

They don't need to know my weight!"

Shortly, she had a recollection of being pulled over by Sylvia, the renowned State Trooper, whom Evelyn has an appreciation for.

Sylvia gave her a break about a decade ago when she pulled over Granny Annie for exceeding the speed limit.

"I went across the county line and hit 34 and was going past Conrad Bernard's place. That's where she used to sit and catch people. She hadn't seen me."

"I had been speeding before I ever come in sight of her. I went right by her. I didn't think anything of it. I wasn't speeding then."

Of course, Granny Annie saw the flashing lights in her rearview mirror and pulled over. 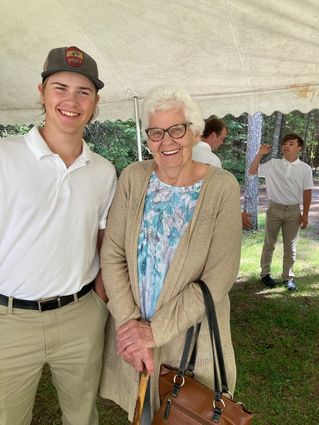 "Sylvia said, 'You quit speeding before you saw me, didn't you?'"

Oh, what a lucky gal!

Granny Annie got a warning.

"Sylvia patted my shoulder and said, 'Just take it easy. Drive carefully, and PUT THAT SEAT BELT BACK ON before you start out!'"

Last Sunday morning, Granny Annie was getting ready to watch Face the Nation.

"I have to keep up with the news," she said.

"I wear a double mask and plastic gloves when I go to the store. I've been off the place five or six times since January. When I go off the place, I wear my masks."

"I can tell you stories until I put you to sleep," she said, laughing like a teenager.