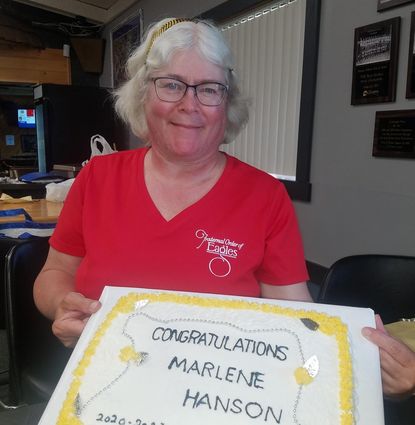 Marlene Hanson with her cake

On Monday evening at the Roseau American Legion, the Roseau Eagles Auxiliary took time out to celebrate a real celebrity.

It isn't often that a small city can claim to have in its membership the Eagles Auxiliary State President.

JoAnn Burkel, the past Northwest Regional President for the Eagles Auxiliary, wanted the word out on Marlene Hanson, who is an import of sorts.

"I'm from Hallock," she said before the gals toasted her promotion with a congratulatory cake.

There's no quit in Marlene, who has served more than a decade before advancing to the very top of the Eagles Auxili...