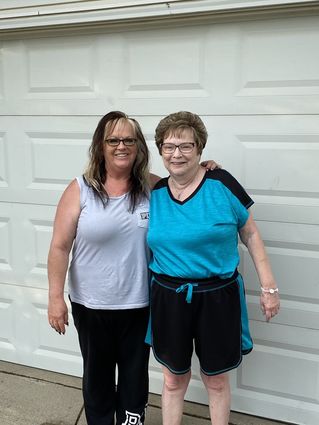 Kyle and I have been together for a "few" years now and he hadn't ever met Auntie Bev.

We were able to see her over the Fourth of July. We made her quite happy and Kyle and Auntie Bev hit it off. She told me I was right that when she met him she would like him instantly.

Kyle fixed some things for her and helped Cousin Jeff get his sight figured out for his gun.

While at the Farmers Market Auntie Bev had a Caramel Nut Cheesecake Sugar Cone. She said it was delicious!

I'm not sure how they did it, but one area we were watching had a grand finale fireworks display go on for 30 to 45 minutes!

I don't think I've ever seen a fireworks display like we were fortunate to watch this year.

Our visit with them was short, but it was fun. Hopefully it won't be as long before we see them again.

Combine all ingredients in a bowl and pour into a 9 x 13, lightly greased casserole dish. Bake at 350 degrees for 40-50 minutes or until set.

Melt butter in a saucepan over medium heat. Whisk in flour and cook for 2 minutes.

Gradually whisk in chicken stock. Reduce heat to low and cook and stir until thick enough to coat the back of a spoon, 4-6 minutes. Stir in heavy cream, and season with salt, pepper, and cayenne pepper.

Serve the casserole with gravy over the top and a big side of mashed potatoes.

The teacher in this joke gave her fifth grade class an assignment. They needed to get their parents to tell them a story with a moral at the end of it. The next day, the kids came back and, one by one, began to tell their stories.

Susie said "We live on a farm and I was collecting eggs from the hen house one day. I gathered the eggs and put them in my basket and set off running toward the house. While running I tripped over a rock and smashed all of the eggs."

"So what's the moral of the story Susie?" asked the teacher.

"Don't put all of your eggs in one basket," said Susie.

Next it was Billy's turn to go.

"We also live on a farm," said Billy. "We have incubators to help our eggs hatch. One night there was a thunderstorm and lightning knocked out the power to the incubators."

"So what's the moral of that story Billy?" asked the teacher.

"Don't count your chickens before they hatch," said Billy.

The teacher turned to Janie. "Janie, do you have a story to share?'

"Yes ma'am. My daddy told me a story about my Mommy. She was a Marine pilot in Desert Storm, and her plane got hit. She had to bail out over enemy territory, and all she had was a flask of whiskey, a pistol, and a survival knife.

She drank the whiskey on the way down so the bottle wouldn't break, and then her parachute landed her right in the middle of 20 Iraqi troops. She shot 15 of them with the pistol, until she ran out of bullets, killed four more with the knife, til the blade broke, and then she killed the last Iraqi with her bare hands.

"Good Heavens," said the horrified teacher. "What did your Daddy tell you was the moral to this horrible story?"

"He said don't mess with Mommy when she's been drinking."