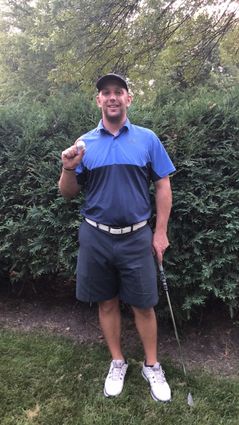 Mike with the lucky golf ball

How sweet it is!

Last Friday afternoon on the 10th tee at Oakcrest Golf Course in Roseau, Mike Johnson, a 2011 RHS graduate and 2016 UND graduate, teed off from the Men's Blue Tee approximately 162 yards away from the cup.

At 27, he knows all the right numbers as a CPA for Brady Martz in Grand Forks.

He was golfing with his dad, Luther Johnson, and the son now holds bragging right over his pop.

"We started on the first hole, and I was two over par through nine," he said by phone on Tuesday afternoon in Grand Forks.

Is this your first hole in one?

"It is," he said with a little bounce in his voice.

And the lucky ball?

The former Roseau Ram hockey player, who has a 2 handicap, basically hit a chip shot with his Callaway 8-iron.

"I didn't. It was right into the sun," he said, adding that he and dad rode the cart to the 10th green.

Look on the edge of the green for the ball?

How close to the pin was your dad?

"He was on the green, but you can't get any closer than me," he said, prompting a laugh.

"We have these stupid things in the holes because of COVID, so I could see it sitting on top of a foam noodle. It was sitting in the cup so I knew it was in."

What did your dad say?

It's like getting your first kiss from a beautiful woman.

"Hopefully, I'll get more to come in the future," he said.

"It's in my bedroom in Roseau. I'll probably bring it to work and put it in my showcase."

"I have a fiancée, Laura Knox. She's from Fisher, Minnesota.

Ms. Laura Knox is definitely an accomplished young lady even if golf isn't her game.

"She's a CPA in the Controller's Office at UND," said Mike, adding that her job title is Senior Accountant and Analyst.

"What did she think of your hole in one?

Get some hugs and kisses?

"I haven't seen her actually. She didn't come to Roseau with me last weekend." he said. "I just got back this afternoon, and she's working. We are getting married next year."

Mike got first hole in one and, believe it, Laura Knox will give her man some affection.