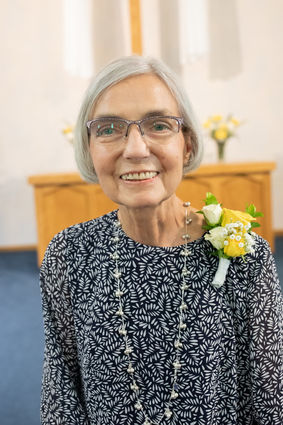 Rhoda married the love of her life, Erling Huglen, October 8, 1960, in Valley City, North Dakota. Rhoda met the future Lutheran minister at Augsburg. Pastor Huglen began his official ministry in 1957 at Trinity Bethany Lutheran Church parish in Harvey, North Dakota. Rhoda joined Erling in Harvey before moving to Roseau in 1962. They were blessed with five children and twenty grandchildren during 55 wonderful years of marriage.

Rhoda was an accomplished musician. She played the piano, organ, and cello, most often for church services. At the age of 16, she performed a solo classical music piano concert in Superior, Wisconsin.

From a young age, Rhoda placed Jesus first in her life. Rhoda loved Jesus and loved her family. She had great wisdom and loyalty, and a great sense of humor among family, coworkers, and friends. She loved to bake blueberry and pecan pies, bread, and chocolate chip cookies. She will always be remembered as a tender, kindhearted, and intelligent person whose strong faith in Christ radiated to all aspects of her life. She was beautiful inside and out, and her daily prayers will be missed.

Rhoda loved her children and their families. She watched and supported many of their activities and sporting events, often driving many miles with Erling to attend games, choir concerts, band concerts, plays, and musicals.