This is a true story for children of all ages 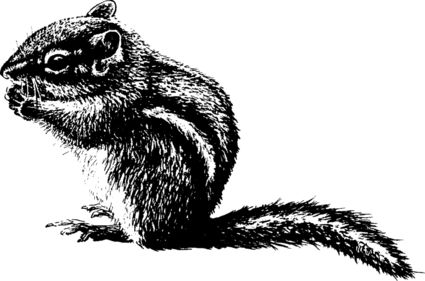 Pastor Joe and a lady he calls "Wife," live on a nice street, in a small town, eleven miles from the Canadian Border.

One evening, Pastor Joe and his "Wife", were sitting at their table eating dinner. Bear and Ralphie, their two cats, were sound asleep in the living room. Pastor Joe was surprised when he saw a swoosh on the floor, going from one corner to another.

"Wife, what was that thing that just went flying by our feet just now under the table?" Wife looked under the table and said. "I don't see anything Joephus, maybe it was your imagination!" "No Wife, I am sure it was something. And I am pretty sure it was a chipmunk!" "No way," said Wife, but as soon as she said it, sure enough, she saw a chipmunk.

"What can we do Joephus?" said Wife. "We need to catch that chipmunk! It is pretty obvious that our cats think he is part of the family". "I was just thinking about that," said Pastor Joe. "I am going to call him 'Little Guy', because that is what he is!"

Little Guy. decided that he wanted to stay in this warm house. There were two nice people, two lazy cats, water and food, what more could you ask for? He didn't miss his brother who lived out in the yard, he only thought of himself. The next day Little Guy saw a wire cage sitting in the basement. He decided that it would be uncomfortable to sleep in. After awhile it disappeared.

The basement was his favorite place to spend his days eating and sleeping. One day he heard a lot of commotion. Great big flat 4x8 boards came into his house and were put side by side in the basement to form four walls. Wife stood in the middle of her self-made fort, and smiled. She then brought a plastic clothes basket inside with her and set it on the floor.

Little Guy didn't see where she went, but when he thought the coast was clear, he decided to go in the squared off area and sniff the basket. As soon as he did the plastic clothes basket lifted up and went upside down trapping him inside. He panicked! Running round and round, seeing no place of escape, he looked at a plastic square on the basket, and started chewing.

Little Guy had very sharp teeth for chewing. He chewed through the basket in about five seconds. Out he escaped, running round and round the tall masonite walls which Wife had constructed. Little Guy went faster and faster until he was able to climb the smooth side of the walls and fly over the top.

Wife was yelling, Pastor Joe was shouting, a friend who had just come in the house to watch all the wild activity, slapped his legs as he laughed and laughed .

Pastor Joe and Wife then sat in silence. The walls Wife constructed had been taken back outside, and put in the garage. They looked at each other and shaking their heads, said, "This is impossible". We should never have given him a name because when we did he become part of our family. "Oh joy".

Little Guy was exhausted, he found a hidden dark corner and slept for two days. He dreamed of a far away place of soft grass, big holes full of hidden peanuts, and his brother. He missed his family.

Unbeknownst to him, his brother had been thinking about him too, and looking for him. He looked by the river, he looked under the flowers, and even looked underneath the porch of the house next door. He was sooo lonely.

One day Little Guy was upstairs in a small room of Pastor Joe and Wife's house. Wife saw Little Guy looking up at the window. "Well, Little Guy, it has been an experience!"

She quietly opened up the window and waited. Little Guy smelled the fresh air . He immediately wanted to check it out! He hopped up on the window sill, with Wife looking on. She quietly took her hand and softly batted his bottom making him jump out the window onto the ground.

He landed on the soft grass. In absolute joy, Little Guy made a beeline for the garden spying his brother along the way. They looked at each other, and in one leap toward each other, jumping and frolicking, making circles in the air. Landing back on the ground they played in absolute glee.

Everyone was so thankful that Little Guy was safe and happy. Pastor Joe and Wife often see their friend, and leave him peanuts to store for the winter. Little Guy sometimes thinks of the warm house, with two sleepy cats, but his nest is warm and comfortable, making him very happy.

You care for people and animals alike, Oh Lord. How precious is your unfailing love, oh God. Psalms 36:8