We got up one morning and it was "froggy" out! and it has been "froggy" ever since 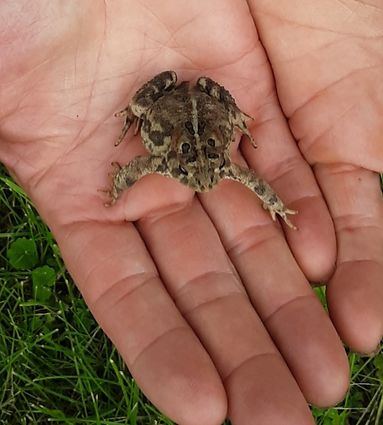 One day Pastor Joe and Wife put in a new window. It was a big window they could crawl through to the outside of their basement. It was a nice window with a deep well that it was set into.

So they opened the window up from the inside of their basement. Pastor Joe caught as many frogs as he could. He set them free in the yard. "Happy frogs!" Goodness, Pastor Joe was so happy, until the next rain.

More frogs jumped down into the window well. Pastor Joe had to crawl back in for the second day to catch all the frogs, tossing them out onto the lawn. But his good deed turned into a frustration.

Tossing them into the grass just sent them back to the north side garden...and yes, the next rain they would jump back down into the window well!

It was last Monday morning. This time, 5 more frogs had jumped in, along with a little gray mouse. All the frogs were hiding in the rocks, and Little Mouse was hiding next to the cover of the sump pump.

Pastor Joe crawled into the well, and picked up "Little Mouse" and cradled him in his hand. He breathed a short prayer over him asking God to bless Little Mouse's day. Then he carried him to the river's edge and let him go. Then he finished his daily task by rescuing the rest of the frogs.

It has become a daily morning routine. Now a blue bucket has been fetched to put all of the frogs in to carry them to the river. There is also a pink towel to drape over the top of the bucket because of one big green frog jumping out.

Monday August 24, the saga continues. A total of five frogs, and a badly mangled finger belonging to Poor Pastor Joe. There is also the following evidence... (If you have ever gone to the "Country Bear Jamboree" at Disney, the biggest bear sings "There is Blood On the Mountain"). Well there is now "Blood on the Rocks".

Pastor Joe has torn his middle finger open on the hinge of the egress window. He refuses to go get stitches, and is worried about how he will wash his hand since he has been picking up frogs. Wife told him that frogs are clean because they are wet, and that he will not be washing his hand.

Happy frogs, Yes it is a daily task, checking and saving lives. Goodness, the content and sometimes look on Pastor Joe's face makes it worth it.? Update: trip to the doctor...antibiotics, and no stitches. Super glue works wonders (just kidding).

And God looked over all He had made And saw that it was excellent in every way....Genesis 1