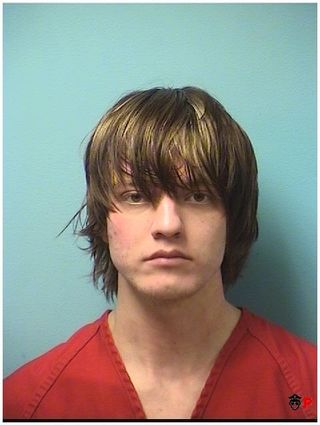 Put the word out that Roseau takes shoplifting very seriously, especially by out-of-towners.

A week ago Thursday afternoon, a chap from Brooten, Minnesota, took a liking to a pair of boots, a winter coat and a pair of Levi jeans.

He had cased the joint at least a couple times a week ago, possibly figuring a young store clerk wouldn't know how to react.

Mr. Nelson, 24, was wrong and what pursued next after he bolted from Ronning's was a 110-mile an hour chase east on Highway 11, south on County Road 9, and then side road and farm fields.

On Saturday evening, Lyle Larson, the former owner of Ronning's in Roseau, was impressed upon hearing that the car chase was clocked at 110 mph.

"I'm glad to hear that there's a car over there that will go that fast," he said from Little Fork.

It was led by a 2010 White F150 Ford pickup that had been stolen in the St. Cloud area about a week earlier.

On Saturday evening, Lisa Howe, manager of Ronning's in Roseau, shared what she knew about the heist.

"Assistant manager Ceciley Parker was ringing the guy up" said Ms. Howe, who had been working at Ronning's in their TRF store that afternoon.

"He was trying on boots and wanted to wear them out, what we allow," said Ms. Howe, adding that this individual had been trying on coats, too.

He had the coat on and was carrying a pair of jeans when he came up to the checkout counter," she said.

"The routine is, you ask for their phone number. So, he gave a phone number which probably was phony and a name.

Ceciley Parker was ringing up his boots and he said, 'Oh, I have this jacket on. Here's the tag for that and these jeans."

There was never an intent to pay.

"She was going to put the jeans in a bag and he just grabbed them and took off out the door," said Howe.

Last Saturday evening, Ceciley Parker, 19, talked about the wildest day she's had as a store clerk.

The whole incident is etched permanently in her brain - every single second of her encounter with the shoplifter.

He was nicely attired with the new boots and a winter coat, both stolen, but he wanted those new jeans in Ceciley's hands.

"He ripped the jeans out of my hands and ran out. I think the total was a little over $300."

"It was weird. Usually, people just try to be sly about it. He was super nice. He knows how to function in society perfectly fine. He was saying 'please" and 'thank you.' He called me, 'ma'am'."

When she asked for his name, he gave her the name of Kelso.

"He ran full speed out the door. He didn't run to a vehicle," she said

To get an even better look, she walked down to the stoplights but didn't see him.

"Officer Klein came in the store and asked what he should look for, and I gave him a description that he was tall and skinny with long blonde hair down to his shoulders."

It was shortly afterwards that the chase was on.

Roseau County Sheriff Steve Gust, reached by phone this past Monday, remarked that Mr. Nelson of Brooten isn't locked up at the Roseau County Detention Center.

Sheriff Gust was contacted at 2:01 with the Initial Complaint Report and the chase was on. At times, he hit 90 plus miles an hour.

"It was a simple theft, but we didn't know who he was. When he took off in his pickup, he was driving erratically. We tried to stop him and he wouldn't stop. He took off even faster."

They were chasing a stoned driver in a stolen vehicle.

"He hit a post near a shed. I think he was trying to stop when he lost control," said Gust. "There was no damage to the shed and the bumpers was bent some."

Mr. Nelson took off on foot.

"Deputy Devin Corneliusen caught up with the guy and tackled him. Well, the guy tripped over a log, and Devin tackled him after that."

It had been a quite a trip for Aaron Daniel Nelson, who was high on heroin and meth.

"He was higher than a kite," said Gust. "It kind of worked out okay for us. We got him out of here and hopefully he gets some help."

It could have been bad.

When Sheriff Gust was asked if he had driven across any fields, he admitted he hadn't.

"I was on the roads most of the time. My deputy Devin crossed the fields. He was on the fields a couple of times."

It was a pretty peaceful arrest.

"The guy didn't fight, He was all tired out from running and being high. He didn't have much energy."

On Tuesday, the following charges were filed in the 9th Judicial District Court in Roseau.

Count 1: Fleeing a Peace Officer in a Motor Vehicle.