This young couple is definitely off the beaten path 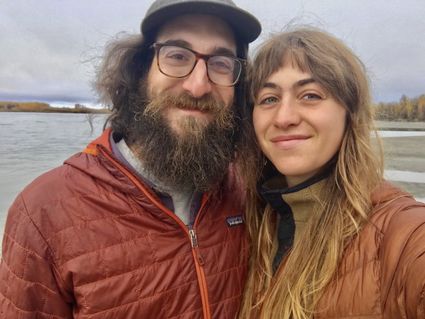 Usually, there's a section in high school yearbooks about who's destined for fame and fortune and/or who's going to have an interesting life.

He's up in Fritz Creek, Alaska, and looks like a member of Butch Cassidy and the Sundance Kid's gang.

Oh, he's on the straight and narrow and is living with his girlfriend, Kyra Harty, who's pretty hearty herself.

A week ago, speaking by cellphone from the Kenai Peninsula, Keon, 30, was in Homer getting some supplies.

"Homer is the closest city, about 15 miles away," said the UND graduate in Outdoor Education and Recreation.

It's a perfect major for the bearded chap living quite comfortably in the bush country.

He first met his girlfriend, who is originally from Chisholm, at the University of Duluth.

"She has a degree in Community Health Education," he said, adding that they moved up to Alaska a little over two years ago.

"I've been building since the end of college and combining that with folks who were starting a folk school," he said, explaining that students could learn all sorts of traditional skills like kayak building, tanning and farming.

"That didn't pan out", he said, explaining that they did that for the first six months.

"We're at another gal's homestead now. Kyra has been working with Marsha making jams and jellies and taking care of all of her animals."

He is no longer a flatlander.

"The whole area is shaped a lot like Duluth. There's the bluff and then there's a spit," he said. "It's all there on the ocean. The property we bought is up on the ridge."

Last Thursday, November 12, he cruised into Homer to get studs on the tires.

"It's raining here, but we've got snow and ice up at our new place. We're still staying at Marsha's. She lets us raise some pigs with her pigs and chickens with her animals."

Their plans are to stay at Marsha's until they've got their new place finished enough to move into.

"We're hoping next summer. Marsha's is at the bottom of the hill and our place is way at the top."

He and Kyra have nine acres, and the going price if there is a view is 10 grand an acre. They didn't pay quite that much.

"Ours is really unfinished. There's no power, no water, and the road is just a trail," he said, noting that they got a decent deal from a couple who wanted to sell it quickly.

"There was a time when land was going cheap in Alaska - a thousand an acre,” he said.

“One guy bought a whole Russian village at the head of the bay. A Minnesota guy who probably didn't spend more than 10 grand for the whole thing, and he's got 20 acres with abandoned buildings and now a huge cattle ranch."

He and Kyra are learning things they never knew before. For instance, they help slaughter cattle at the cattle ranch.

He's getting quite an education.

"I feel like I wasted too much talent in Roseau not learning enough from the farmers and now I'm scrambling to get caught up to these old-timers."

The assumption is Alaska is the land of cold and snow.

It depends on the location.

"Homer has less snow than Fritz Creek, which is 14 miles northeast of Homer," said Keon, on a day when the snow had turn to rain in Homer.

But not in Fritz Creek.

"I don't think I'd make it up to the top of the hill without chains on the tires," he said. "Even with the studs, it's always good to have the chains. It takes an adjustment learning to drive on the hillsides."

"Yeah, I've been doing really good. I've been working construction, and they pay really well up here. If you'll show up on time and work hard, and especially if you're from Minnesota, there are a lot of old Minnesotans here who are happy to grab you up. Yeah, I've been doing all sorts of buildings and really getting into the concrete side of things the last two years."

Presently, he's fixing up their story and a half unfinished cabin at the top of the hill.

"Yes, that's why we're up off the ground. I need to get some strappings on the jacks. It looks like we're down in Louisiana with how high we are off the ground."

He has no complaints.

"That's the thing when you buy something that somebody else has started. You're going to scratch your head a lot and think, 'Why the hell did they do this?' We're just trying to fix as much as we can before the winter sets in too hard."

Alaska is renowned for its ground-shaking quakes.

"We've had a few earthquakes and it's still level," he said, adding that the cabin has held its ground.

"We're getting it all wrapped up and sided. I had to get a wood stove in there because I was tired of working in the cold."

Mr. Keon Mostofi is no stranger to challenges. In 2015, he hiked the entire Appalachian Trail, all 2.190 miles across 14 states up and down various elevations.

"I started in April and finished in September," he said. "My whole body was falling apart at the end. What do you expect if you walk 2,000 miles. You're going to hurt yourself."

A week ago, he had planned to shop in Anchorage for some boots.

"Then we got a big Covid alert this morning. We'll skip going up to Anchorage this weekend," he said, mentioning that they'll shop for their items in Soldotna.

"That's our Home Depot. It's kind of like our Grand Forks."

They are doing well.

"There's a lot of work here if you want it. Homer is more like a Roseau size town, and we're kind of in Badger at Fritz Creek."

He acknowledged the changes in Homer because of Covid-19.

"The bars are pretty much done, but the hardware and grocery stores are open. For all of 2020, there's not a lot been going on in Homer."

"We've been coming down for Christmas and New Year's," he said. "We definitely saw the family and then we shot right back over to Duluth. Kyra's mom lives in Duluth. It was either Roseau or Jamestown to visit my folks and my sister, Setareh."

This winter, they're staying home because of the virus.

Your folks been up to visit?

"They came up two years ago. They drove up (the Alcan Highway) which was awesome for them," he said.

His dad, he said, has fallen in love with Alaska and wants to come back up after he retires this May.

"They're planning to drive up if Canada will let them," he said. "Kyra's mother is Liz Harty. Her husband passed away two years ago right after we moved up. He had been in Homer years ago and remembered Halibut Cove and recognized all the places like the Salty Dawg. He had been up here on a fishing trip with a bunch of buddies in the 1980s. He was a welder on the Iron Range and came up with the union boys."

He explained that they can't drive through Canada these days.

"You're pretty much flying in or flying out right now."

"A lot of folks up here say, 'Oh you gotta spend winters up here in Homer.' Yeah, spend a couple down in Roseau, and then tell me how cold it is up here."

"I said, 'Hey, let's head north. We'll have snow nine months out of the year.' It's definitely a longer winter, but it doesn't get below freezing very often up here. We're right on the ocean and the warm ocean air blows in," he said.

"We went up to the hot springs north of Fairbanks last winter, and that was chilly. They've got some cold weather up there."

Keon remarked on the number of sayings in Alaska.

You can start with "snowbirder."

Which he most definitely isn't.

A snowbirder is someone who lives in Alaska during the summer months but generally goes somewhere warm and sunny during the winter.

But not the ice storms.

"There's nothing worse than having the freezing rain. You get ice on everything and it gets super heavy. I wish it was colder. It can snow all it wants."

Is Kyra happy up there?

There was a slight pause.

"They say, 'Alaska, where the ladies go to become the man of their dreams.' I like that one the most."